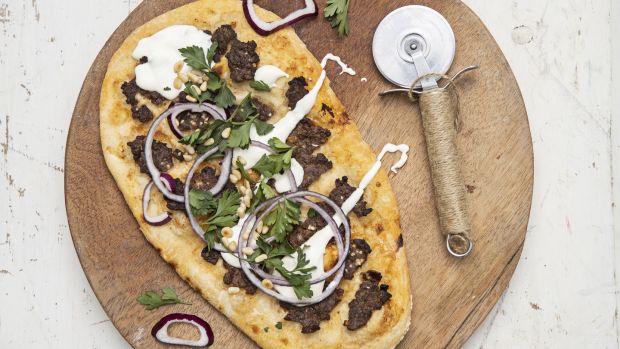 1 Put the flour, salt and sugar into a mixing bowl, then add the yeast and olive oil into the warm water. Mix well and start to add to the dry ingredients to form a dough.

2 Remove to a floured surface and knead for five to six minutes. If you have a mixer this can be done in half the time.

3 When the dough is smooth and elastic, cover the bowl with clingfilm and leave in a warm place to double in size, for 45 minutes or so.

4 For the topping put the beef, pepper, half the red onion, garlic, parsley stalks, spices and tomato purée, salt and pepper into a food processor and pulse until smooth. If you don’t have a food processor, just mix it well by hand.

5 Remove the dough from the bowl on to a lightly floured surface and knock it back. To make two lahmacun for four people, divide the dough into two balls, cover with clingfilm and put in the fridge to chill for 30 minutes; it will be easier to work with.

7 Grease two baking trays with some olive oil. Roll out the dough as thin as you can, then lay on to the trays.

8 Take the beef mix and spread it thinly on top of the dough, then bake for 15 minutes or so, until the dough is golden and crisp.

9 To serve, scatter the pine nuts over the top, with artistic dollops of yogurt, torn parsley and a dusting of sumac.