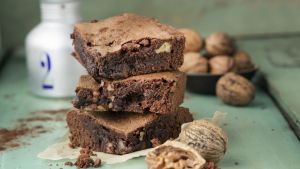 2 Roughly chop all the chocolate. Set aside 50g of chopped chocolate to fold in with the walnuts.

3 Melt 150g chocolate in a bain marie (a medium bowl set over a pan of simmering water) and once half melted, add in the cubed butter and stir until fully blended and smooth.

4 Remove the melted chocolate from the heat and beat in the sugar (you can use a handwhisk to beat in the sugar, and don’t worry if it still appears slightly grainy at this stage). Set aside for five minutes before gradually stirring in the eggs and vanilla and mixing to a smooth batter.

5 Meanwhile, sieve the flour, cocoa powder and salt together into a bowl. In two batches, fold the sieved ingredients into the chocolate mixture.

6 Stir in the walnuts and 50g reserved chopped chocolate.

7 Transfer the mixture into the prepared tin, spreading it evenly into all four corners and levelling the top.

8 Bake on the middle shelf of the preheated oven for 25-28 minutes or until the surface looks crisp and slightly cracked on the top (the centre will still appear slightly gooey). When baked, the mixture should still appear slightly tacky when a skewer is inserted into the centre. To avoid overcooking the brownies, turn off the oven and leave the brownies inside for another five minutes to allow them to cook on slightly. After five minutes, remove from the oven and allow to cool fully in the tin.

9 To portion, lift the brownies in the parchment onto a work surface, use a large knife to cut crossways into approximately 12 squares.

Variation: Substitute mini marshmallows instead of walnuts, for a kids party 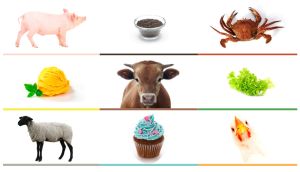 Róisín Ingle: How Taylor Swift helped me navigate the puzzle of parenthood
3

And the winner is... Yes, it’s time for the prestigious Car of the Year award
Real news has value SUBSCRIBE