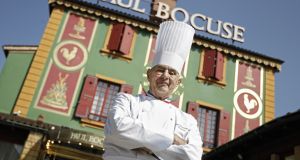 Paul Bocuse, the master chef who defined French cuisine for nearly half a century and put it on tables around the world, has died aged 91, France’s interior minister has announced.

Mr Bocuse’s temple to French gastronomy, L’Auberge du Pont de Collonges, outside the city of Lyon in south-eastern France, has held three stars — without interruption — since 1965 in the Michelin guide, the bible of gastronomes.

Mr Bocuse, who underwent a triple heart bypass in 2005, had also been suffering from Parkinson’s disease.

Often referred to as the “pope of French cuisine”, Mr Bocuse was a tireless pioneer, the first chef to blend the art of cooking with business tactics — branding his cuisine and his image to create an empire of restaurants around the globe.

As early as 1982, Mr Bocuse opened a restaurant in the France Pavilion in Walt Disney World’s Epcot Centre in Orlando, Florida, headed by his son Jerome, also a chef.

In recent years, Mr Bocuse even dabbled in fast food with two outlets in his home base of Lyon.

“He has been a leader. He took the cook out of the kitchen,” said celebrity French chef Alain Ducasse, speaking at a January 2013 gathering to honour Mr Bocuse — then just shy of his 87th birthday.

While excelling in the business of cooking, Mr Bocuse never flagged in his devotion to his first love, creating a top class, quintessentially French meal. He eschewed the fads and experiments that have captivated many other top chefs.

“In cooking, there are those who are rap and those who are concerto,” he told the French newsmagazine L’Express before the publication of his 2005 biography. He added that he tended toward the concerto.

In traditional cooking, like his, there is no room for guess work. “One must be immutable, unattackable, monumental,” he declared.

Born of a family of cooks that he dates to the 1700s, Mr Bocuse stood guard over the kitchen of his world-famous restaurant even in retirement when he was not travelling, keeping an eye on guests, sometimes greeting them at table.

The red and green Auberge by the Saone River, his name boldly set atop the roof, is a temple to Mr Bocuse — who was born there — and to other great chefs.

Born on February 11, 1926, Mr Bocuse entered his first apprenticeship at 16. He worked at the famed La Mere Brazier in Lyon, then spent eight years with one of his culinary idols, Fernand Point, whose cooking was a precursor to France’s nouvelle cuisine movement with his lighter sauces and lightly cooked fresh vegetables.

Mr Bocuse’s career in the kitchen traversed the ages. He went from apprenticeships and cooking “brigades”, as kitchen teams are known, when stoves were coal-fired and chefs also served as scullery maids, to the ultra-modern kitchen of his Auberge. - AP