Child portions are too big, breakfast is in, and we still love a Sunday roast, report reveals 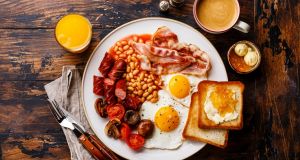 A new report reveals that 67 per cent of 18- to 24-year-olds said they made breakfast at home five times a week. “Cooking” breakfast from scratch could be anything from making a smoothie to frying a full Irish. Photograph: Getty Images

Irish people are cooking just five meals per week at home – whether breakfast, lunch or dinner – according to Home Truths, an annual report on consumer habits from the country’s largest food retailer, SuperValu.

As part of the supermarket chain’s Let’s Get Ireland Cooking campaign – to promote healthy eating and cooking at home from scratch – an online survey of 1,000 adults, carried out in late February of this year, found that nine out of 10 of us, or 87 per cent, cook five times a week.

That figure is up from 84 per cent last year, and according to the report, released today, the increase is driven by an upsurge in the popularity of cooking breakfast, particularly among 18-24-year-olds. In this age group, 67 per cent said they cooked breakfast five times a week, up from 42 per cent last year.

For the purposes of the survey, “cooking” breakfast from scratch could be anything from making a smoothie to frying a full Irish, the imperative being that it was constructed from ingredients at home rather than picked up “on the hoof”.

Whether they cooked it from scratch or not, over half of parents surveyed said they give their children, under 16 years of age, portions that are the same size or bigger than their own.

Time remains the main impediment to cooking from scratch, but fewer people are blaming laziness (down from 25 per cent last year to 17 per cent this year) or lack of inspiration (down from 19 per cent to 12 per cent).

However the popularity of ordering takeaways, and visiting fast food restaurants, continues to increase, both up 5 per cent compared to last year.

The report, developed in conjunction with Dr Mary McCreery, consultant dietician nutritionist, also addresses perception and understanding of the food pyramid. This visual representation of what constitutes a balanced diet was recently revised – amid much debate – and vegetables and fruit replaced bread, pasta, cereals and rice as the foods we should be eating most of.

According to the report, half of adults are aware of the Department of Health’s new food pyramid and almost nine out of 10 feel they should make changes having seen the food pyramid, most saying they need to eat more fruit and vegetables and cut back on treats.

Commenting on the report, Dr McCreery said: “It’s really encouraging to see more people cooking good, wholesome food from scratch and that time isn’t such a barrier, as people become more equipped in their cooking skills and routines. Planning meals in advance and buying fresh food not only benefits your health; it also is less expensive than any of the other, less healthy options.”

Musician and mental health campaigner Niall Breslin, Galway chef and author Michael O’Meara, and Siobhan Berry who writes the Mummy Cooks blog, have been revealed as the new faces of Let’s Get Ireland Cooking. They join the supermarket chain’s existing ‘ambassadors’, chefs Kevin Dundon and Martin Shanahan, Stephen and David Flynn of The Happy Pear, and food stylist and writer Sharon Hearne Smith.