Killian Crowley sends Irish ingredients to Italy, where he takes on the best young chefs in the world this weekend 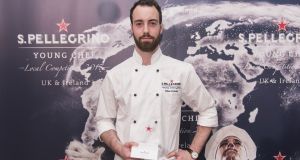 Killian Crowley, from Aniar restaurant in Galway, takes on the best in the world in the global final of the S.Pellegrino Young Chef 2018 competiton in Milan this weekend

Killian Crowley, chef de partie at Michelin-starred Aniar restaurant in Galway, is among the 21 finalists taking part in the S.Pellegrino Young Chef 2018 Grand Finale in Milan this weekend.

Crowley won the UK and Ireland qualifying round of the competition in London in November for his dish of turbot, kohlrabi and sea purslane, and has been mentored for the global final by British chefs Angela Hartnett and Alyn Williams.

This year, for the first time, there is a public vote, separate to that of the grand jury. You can vote for Crowley in the Fine Dining Lovers People’s Choice Award here, and voting remains open until 3pm on Sunday, May 13th.

Crowley describes his dish as “really simple: a fish cooked on the bone, vegetable cooked in salt crust and a beurre blanc sauce with some sea vegetables”, and it is inspired by the west of Ireland .

The ingredients to create it are being sent to Milan by courier, and all but the fish, which will be sourced in Cornwall, are Irish.

“I’ll be in Milan on Thursday morning to check that all the produce has arrived and is in perfect condition. The forager that we use at Aniar will pick all the seaweed, the kohlrabi is from Galway market, the oyster from Dooncastle,” he says.

“The fish will be from Cornwall because it is still really hard to get the exact fish that you need landed in Ireland by an Irish boat. Sourcing and organising all the produce is the most stressful part of the competition, but there is no point in showcasing Irish food without using the best produce.”

Crowley has been working on elements of his dish with Angela Hartnett at her restaurant Murano, but due to her unavailability he will be mentored in Milan by Alyn Williams, who was also on the judging panel for the UK and Ireland final.

“Every time I was training in Angela’s kitchen, the whole team was looking after me ... for every tasting Alyn was there as well. Surrounded by these two brilliant chefs, I’ve been able to craft the dish ad take it to the next level.”

At the UK and Ireland final, Angela Hartnett said: “Killian’s dish was a superb piece of cooking, it really ticked all the boxes – delicious food, perfectly executed with simplicity at the heart. All four judges put it as their number one dish .”

Crowley began his culinary training in Belgium, aged 15, and has worked at Michelin starred restaurants across Europe, including with Alain Ducasse at the three-star Le Louis XV in Monaco.

A desire to do something different brought him to Aniar in Galway two years ago. “That was the only place for me. If I wanted to do French food in Dublin, I might as well have stayed in Paris or Brussels. ” He was born in Belgium to an Irish father and Belgian mother.

Irish chef Mark Moriarty won the inaugural edition of this global competition in 2015, and in Milan next weekend he will cook at a gala dinner alongside last year’s winner, Mitch Lienhard from the US.

The competition reaches its conclusion on Sunday, and the cooking sessions and awards ceremony will be live-streamed at sanpellegrino.com and at finedininglovers.com.