Yotam Ottolenghi: Tear up the shopping list and just use what you’ve got 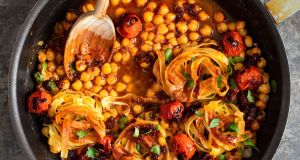 As with every other person to whom 2020 “happened,” I wonder a lot about lockdown legacy.

Once our freedoms return — our freedom to travel, our freedom to sit in a packed theater or crowded restaurant, our freedom to hug it out — I wonder what will endure and what will fall by the wayside. Will we ever shake hands again, for example, or will that be something we used to do? Will elbow bumps or ankle dances become the new normal? Will we travel to meetings we could Zoom to instead? Will we — or is this just me? — ever choose to go to bed later than 10.30pm.?

So, too, with food and cooking. What will the legacies be?

For all of last year’s uncertainties, one constant was the need to get food on the table day, after day after day. Housebound, the way we shopped, cooked and ate very much changed. The starting point for what to cook, for example, was one such change.

Before, we might have drawn up a long list of ingredients based on a recipe read. In 2020, by contrast, the starting point was often what was already there, on the cupboard shelves at home or at the local store. These were the meals where a tin of anchovies, a can of tomatoes and some dried spaghetti simply became everyone’s supper. Bags of flour turned into bread, a tin of sardines turned into lunch, dried lentils and chickpeas had the time to be soaked and turned into soups and stews.

The more we used what was already on hand, the more we all realized that it didn’t actually matter if we had the “wrong” type of pasta or chilli flakes. Spices could be left out, and herbs substituted. As our options became more limited, the more creative and resourceful we became. It’s a paradox — the less we have to work with, the more open-minded, relaxed and confident we can be — that I hope will endure.

Now, don’t get me wrong! I am in the business of writing cookbooks. I hope very much to inspire the seeking out of new ingredients and the experimenting with something novel. This is my very bread and butter: I just mind much less, these days, what kind of bread you’re buttering.

What I have in my pantry is not going to be exactly what you have in yours, but that should not matter. You’ll be able to spot my staples in the recipes I’ll be sharing this year: the dried pasta and chickpeas; brown rice polenta and soba noodles; the nuts and dried chillies, olive oil and plum tomatoes. Of course, I made it to the shops like everyone else, scooping up seasonal greens and fresh herbs when I could, picking up a chicken every now and then, but the recipes I’m excited to share with you in 2021 all take as their starting point these pantry staples.

I encourage you to look at the recipes and, rather than reach for a pen to make up a shopping list from scratch, see what in your pantry could be used instead. If I say tagliatelle, as I do here, then other pasta nests, like fettuccine or pappardelle, would work just as well. Play around with the smoky tomato oil, for example, adding different chillies or spices, such as cumin or coriander seeds. Leave out the fresh parsley, if you don’t have any, use other tomatoes rather than datterini.

The world looks poised to return us to its freedoms. For now, though, we’re in a strange place. Making the transition from whatever this is to whatever is going to be will involve complex choices. Despite this — because of this — I invite you to keep things pared-down and pantry-based in the kitchen.

Method
1. Make the smoky tomato oil: Place a medium sauté pan over high heat. Once hot, add the tomatoes and cook for 4 minutes, shaking the pan as needed, until tomatoes are charred on the outside but still retaining their shape. Remove the pan from the heat and set aside to cool for 5 minutes. Stir in everything else and return to medium-low heat. Cook for 15 minutes, stirring occasionally as it bubbles very gently. Remove from the heat and set aside to infuse.

2. Prepare the pasta: While the tomato oil infuses, add the 2 tablespoons olive oil to a large, high-sided sauté pan and heat over medium-high. Once hot, add the tagliatelle nests and cook for 1½ to 2 minutes on each side, or until nicely golden. (Don’t worry if you don’t get colour on the sides.) Set the toasted tagliatelle nests aside and rinse out the pan.

3. Drain the soaked chickpeas and add them to the same pan along with a litre of water and a half teaspoon baking soda (bicarbonate of soda). Return the pan to medium-high heat and bring to the boil, skimming the scum as needed. Turn the heat to medium-low, cover with a lid and cook for 10 to 15 minutes. Add 1½ teaspoons salt and test the chickpeas at this point. They should be soft but still retain their shape. Turn the heat to medium-high and bring to a simmer.

4. Stir in the garlic, then nestle in the fried tagliatelle nests. Replace the lid and cook, undisturbed, until pasta is tender and most of the liquid has been absorbed, about 5 to 10 minutes, or according to package directions. Remove the lid and, without stirring, squeeze over the juice from the lemon halves.

5. Spoon the smoky tomato oil on top, sprinkle with the parsley and serve directly from the pan. Serve with the extra lemon wedges to squeeze on top to taste. - New York Times.