How to make the perfect Irish coffee 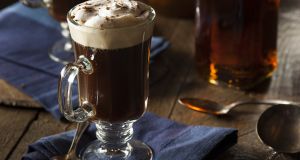 Irish coffee has become a Christmas drink by accident and by design. Photograph: iStock

Irish coffee was not created with Christmas in mind, but by accident and design it has become a Christmas drink. It is suitably decadent for the season that is in it and has two things that are most in demand at Christmas time, warmth and alcohol.

Irish coffee has only four ingredients: coffee – Irish whiskey, sugar and cream – but a thousand twists. It is an easy drink to get passably right, but a hard drink to perfect. The coffee has to be strong and the whiskey has to be Irish, or else it is not an Irish coffee. Scotch coffee does not have the same ring to it or cachet.

The oft-repeated story goes that Irish coffee was invented in the old Foynes Flying Boat Airport in 1942 when a transatlantic plane had to turn back because of bad weather. Barman Joe Sheridan came up with the recipe to warm the stranded passengers.

Success has many fathers. Another version of the story goes that Irish coffee was invented in Dublin. This claim came from a Harvard history professor John V Gallagher, presumably a man of the most impeccable sources.

He wrote an essay stating that Irish coffee was actually invented in The Dolphin in Dublin’s Temple Bar and concocted by the proprietor Michael Nugent, to disguise the awful taste of wartime coffee.

Whatever its origins, Irish coffee is a globally popular drink. It is aesthetically perfect, the black coffee juxtaposed with the white cream a little like a certain other world-famous Dublin product.

Getting that look is where many people flounder. It is a matter of elementary physics that the cream has to be less dense than the coffee/whiskey mixture. So many get to that stage only to find the cream sinking into the coffee mixture.

The stronger the coffee, the denser the mixture. The sugar, too, has a role in ensuring that it is strong enough for the cream to float on top.

Teeling Whiskey global brand manager Kevin Hurley recommends cream that is “lightly aerated not heavily whipped” and poured over the back of a heated spoon to get the right viscosity.

Preheat a glass with some warm water and discard. Add the whiskey, demerara sugar syrup (or sugar), coffee and hot water and stir to combine.

Warm a large spoon and gently pour the cream over the back of the spoon to float on top of the coffee. Garnish with a light dusting of grated nutmeg.

Railway cottage with amphitheatre garden in Ballsbridge for €745k
4