Give Me Five: Hummus with lamb 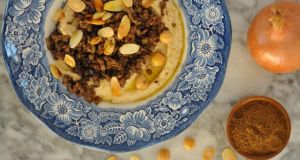 Hummus with lamb: easy and delicious

This week’s easy and delicious offering is inspired by the Middle Eastern dish hummus kawarma. It consists of a creamy pool of hummus with warm, spicy fried lamb in the centre. Typically neck fillet of lamb is used, but I use minced.

This can be served with warm pitta breads to scoop up the hummus or with a crunchy cucumber salad. I scatter the finished bowls with toasted almond flakes for crunch and flavour, but toasted pine nuts or some juicy pomegranate seeds would also be great.

Pine nuts are quite expensive and turn rancid quickly due to their high oil content. Buy from a source with a high turnover to ensure optimal freshness and keep them in the freezer for up to three months.

If you’re making the hummus yourself, reserve some of the chickpeas for scattering over the finished dish. For years I added olive oil to my hummus in order to thin it down to its traditional smooth consistency.

This often resulted in a distinctive olive oil-flavoured hummus that was often too heavy with lamb dishes.

I am smitten with the Yotam Ottolenghi version (available in his books and online) where he adds ice cold water and plenty of lemon juice to create a creamy smooth paste.

Ottolenghi is a self-confessed “chickpea pedant” and has written much about how the perfect hummus should be made: how the chickpeas should be soaked the night before and oil only reserved for swirling on top when serving the dish. If you are a fan of hummus, try his recipe to the letter first, then adapt it as you wish.

Even though he frowns upon Nigella Lawson’s addition of peanut butter, I have found it very handy in the past. When the tahini jar is nowhere to be found, I reach for the smooth peanut butter and add a dash of toasted sesame seed oil. I also sometimes dilute the rich flavour of a garlic-spiked hummus with a little natural yoghurt when serving it to kids. A little tub of hummus with some carrot sticks for dipping makes a great protein-rich afternoon snack.

Baharat is a Middle Eastern spice blend that is invaluable when creating dinner in hurry. There’s no need to reach for several jars of spices and measure them out; just add some baharat. It adds a sweet depth and flavour to so many dishes, and I really fly through it, adding it to couscous, carrot salads, hummus and meat dishes such as moussaka.

I often make up my own mix. A typical blend consists of black pepper, cumin, coriander, clove, allspice, cinnamon, nutmeg and cardamom in varying proportions. It lasts for months in an airtight jar.

Although this dish is usually eaten with gusto on sight, any leftovers can be used to stuff a warm pitta bread or rolled into a wrap with grated carrot and tzatziki. Add a roasted red pepper or some sun-dried tomatoes to the basic hummus and use as a dip or sandwich spread.

Place a large, heavy-based frying pan over a medium heat. Pour in a tablespoon of olive oil and add the finely diced onion. Sauté the onion for a minute before adding the minced lamb. Cook on a medium heat, moving it and stirring until it loses any trace of pink. After about five minutes, increase the heat and add the spice mix. Stir and fry the mix until the meat starts to crisp up at the edges and take on some colour.

Scrape all the bits of lamb from the bottom of the pan and keep browning it for another five to eight minutes until cooked. Season with salt and then taste. You might want to add more salt or spice mix.

Place at least three generous tablespoons of hummus into each bowl and top with the lamb. Scatter with the toasted almonds and serve immediately.

Every Thursday we’ll tweet and post the five ingredients on irishtimes.com so you can have them ready on Friday. Email givemefive@irishtimes.com with your own suggestions for recipes.