Give Me Five: Clapshot with Parma ham crisps 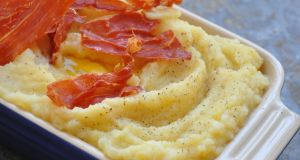 A nostalgic nod to ham and turnip dinners

There is nothing exotic about the ingredients used to make this particular comfort food. They are cheap and easy to find anywhere in Ireland. I got all mine from a local farmer who has a roadside stall once a week.

It is so handy when you miss the weekend farmers’ markets and don’t want to tackle the orienteering course that is the modern supermarket just to pick up some carrots. What my children initially thought was a huge rock caked in mud was in fact a turnip – freshly dug from the ground in the lashing rain that morning, as all good turnips should be.

Neeps (turnips) and tatties (potatoes) are traditionally served on Burns Night in Scotland alongside haggis. Mix them together and add some chives and it becomes the traditional Orkney dish clapshot. Who wouldn’t love to dig into a big bowl of clapshot on a cold night? The same mash is known as ponch maip in Wales.

I have made my own version here, adding some parsnip for sweetness. Yellow, buttery turnip mash is delicious with slow-cooked ham, smoked haddock or a beef or lamb stew. One of my favourite childhood dinners was ham with parsley sauce, turnip, carrot mash, potatoes and lots of pepper.

Turnips have a distinctive peppery taste that is further enhanced by a liberal amount of pepper. I remember passing around the yellow and red Saxa shaker and sneezing as our plates were enveloped in a cloud of pepper.

As a nostalgic nod to those ham and turnip dinners, I have added Parma ham crisps to my mash. These are so easy to do and great for serving with a salad or on top of a soup. You simply place the Parma ham on trays to crisp up in a hot oven, then serve in shards or crumble over for an intense, salty ham crunch.

They are very tasty sprinkled over potato and leek soup, or over poached eggs for breakfast as an alternative to rashers. You can serve them on top of the mash or crumble them and stir through.

If you would like to go the whole hog and serve this mash as they would in Orkney, seek out some haggis or serve with its Irish cousin: white pudding.

I often make turnip chips. They are an alternative to potatoes but are really a different dish altogether. They can’t be compared to a regular chip. Just peel the turnip and cut into thick farmhouse-style chips. Coat in a little olive oil and roast in the oven at 200 degrees for 25-30 minutes until golden and caramelised around the edges. Sprinkle with sea salt before serving.

They are delicious with lamb chops. Roasting the turnip makes it sweet and nutty – so unlike the watery mash that people dread.

Turnip grows very well here and is cheap and full of vitamin C. It is lovely grated and mixed with other vegetables in fritters or latke-style cakes and is fantastic in stew.

Preheat the oven to 200 degrees. Peel and chop all of the vegetables and place in a large pot. Just cover with cold water, then bring to the boil and simmer until just cooked (about 15 minutes). Meanwhile lay the Parma ham on a greased baking tray and bake in the oven until crispy. This takes about 10 minutes, but watch that the ham doesn’t burn, as it easily can. Set aside to crisp up.

Drain the vegetables well in a colander over the sink. Place vegetables back in the pan and leave on the heat for a minute so any residual water steams off. Add the butter, maple syrup and mustard. Mash until smooth and creamy. Season to taste with salt and pepper.

Add more mustard or maple syrup, depending on how hot or sweet you would like it. Butter a serving dish and spoon the mash in. Top with the Parma ham crisps and serve.

Over 300,000 people planning to cook their first-ever Christmas dinner