Georgia on my mind: wine from the world’s oldest vineyards

Country’s proud viticulture may date back as far as 8,000 years 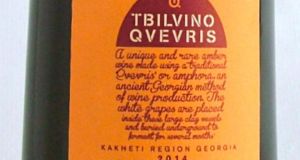 Every wine-producing country likes to boast about their long history but none can compare with that of Georgia, with the possible exception of its Caucasian neighbours.

Claims vary, some suggesting 8,000 years, but certainly this is the genuine cradle of viticulture, with a culture going back millennia. The word wine may even be derived from the Georgian word “gvino”.

It is argued that merchants travelling along the trade routes carried vine cuttings in their saddlebags to the eastern Mediterranean in order to have something to barter. The more romantic version has the vine being carried beneath the armour of every Georgian soldier, so that if he fell in battle, the vine would take root and grow.

It was here that we humans discovered that grapes (from wild vines), stored in containers throughout the winter turned into wine. The Georgians began using qvevri (or kvevri), large clay vessels of various sizes, to ferment the grapes and then age the resulting wine.

Uniquely, this form of winemaking remains a strong part of Georgian culture, despite the influence of the communist state. (Georgian wines were always the most highly prized in the Soviet Union, leading to rumours of counterfeit wines in recent years).

Red wines made this way tend to be vaguely similar to our idea of wine, but white wines, made by fermenting and ageing juice, skins and pips together can be shockingly different, with a unique texture and tannic structure.

There is conventional winemaking as well, usually still using Georgian grape varieties – the country has over 500 unique varieties.

The vine and wine was and is a central part of Georgian religion and culture. and history. Apparently a lengthy multi-course meal, called a supra, is a traditional feast lasting many hours, led by a Tamada (a sort of toastmaster) who introduces topics, toasts and possibly even songs to accompany the food. Look out for Mixed Melodies, the Irish Georgian Youth Choir, for an introduction to the musical side.

Georgian wines have become hugely fashionable in London, New York and elsewhere, particularly those made in qvevri, largely thanks to the alternative “natural” wine movement.

It is worth noting that some argue that the Georgians, with a couple of thousand years’ extra experience, tend to produce the finest orange (or as they say amber) wines. Our own choice so far is limited, although that may change following a large tasting held by the Georgian embassy in Dublin late last year.

Anyone fortunate enough to travel to Georgia for a holiday should take a look at gwa.ge for information on wine tourism.

If you want to remember two Georgian varieties, Rkatsiteli is one of the most common white grapes, and Saperavi a favourite red grape. Or simply enjoy a piece of history drinking any of the wines below.

An intriguing and very attractive wine: lightly nutty and spicy with orange peel and yellow fruits, medium-colour and racy acidity.