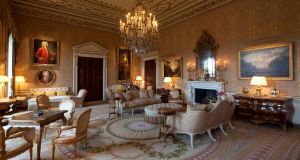 A drawing room at Ballyfin Demesne in Co Laois which has been named Irish hotel of the year 2018 by the AA. Photograph: James Fennell

Ballyfin Demesne, a former boarding school in Co Laois, which underwent an extensive nine-year restoration before opening as a luxury hotel in 2011, is the AA’s Hotel of the Year 2018.

The five-star property, which hosted Kim Kardashian and Kanye West on their honeymoon in Ireland, was voted best hotel in the world in 2016 by readers of Conde Nast Traveler magazine in the US.

This summer, the B&B rate at Ballyfin, which stands on 600-acres of grounds, and a series of formal gardens designed by Jim Reynolds, starts at €960 for a double room, running to €1,710 for the best suite in the house.

Most guests, however, opt for the full board package (from €1,275 for two people), which includes lunch or afternoon tea on arrival, cocktail hour, dinner in the State Dining Room or the Van Der Hagan Room, and breakfast the following morning.

Until 2015, Ballyfin was open only to residents, however reservations are now accepted for dinner for groups of up to six guests, who may chose from a variety of menu options, costing from €105 for three-courses à la carte, to €125 for an eight-course tasting menu.

Shane Ross, Minister for Transport, Tourism and Sport, presenting the award to Ballyfin’s general manager Damien Bastiat in Dublin on Wednesday night, said: “The story of Irish tourism over the last 10 years has been one of hard work and perseverance to get through the troubled times of the economic downturn in order to come out the other side as a thriving industry.

“Ballyfin Demesne, with its welcoming staff and steep history only highlights the best of what the hospitality industry offers to visitors from at home and abroad.”

The other main award winners were Aldridge Lodge in Duncannon, Co Wexford (AA Guest House Accommodation of the Year), and The Twelve hotel in Barna, Co Galway (AA Courtesy and Care award).

“It takes a lot to impress our AA inspectors and to reach the standards required to win Hotel of the Year requires years of dedication to putting the customer first. Our eagle-eyed inspectors leave no stone unturned and follow the most stringent inspection standards in the industry,” said Conor Faughnan, the AA’s director of consumer affairs.

“Beyond the beauty and scenery that Ballyfin Demesne has to offer, it also boasts a friendly and highly professional staff who ensure every customer has a first class experience,” he added.

The AA inspection team also noted the “warmth and welcome from all the team”, with the chief inspector describing a stay at Ballyfin as akin to “being in a private home, with the atmosphere of a period Irish house with all the facilities of a five star resort”.

General manager Damien Bastiat said “We are very proud to gain this recognition for the hard work our team put in every day. It’s a real testament to the Ballyfin ethos and to the beautiful property we are lucky enough to work in.”

Aldridge Lodge, run by Billy Whitty and Joanne Harding since 2005, has just three en-suite rooms, and is noted for its restaurant, where Whitty is head chef.

The AA’s courtesy and care award “reflects an establishment in which an AA inspector would choose to stay themselves, or to bring their own families”. The 2018 winner, The Twelve hotel, where Fergus O’Halloran is general manager, was named Hotel of the Year 2018 by Georgina Campbell’s Ireland.