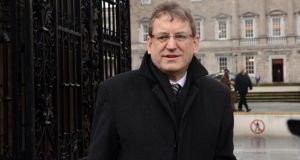 Prof Alan Reilly of the Food Safety Authority of Ireland: said genetic modification was one of a number of promising tools for improving nutrition and increasing food production “yet Europe remains sceptical and reluctant although nobody has become ill or died from the effect of eating food derived from GMOs”. Photograph: Cyril Byrne / The Irish Times

It is time stop dismissing the role of genetically-modified foods for ideological or political reasons and to put aside “irrational and non-science based fears” of new technologies, Food Safety Authority of Ireland’s chief executive Alan Reilly has said.

Prof Reilly said genetic modification was one of a number of promising tools for improving nutrition and increasing food production “yet Europe remains sceptical and reluctant although nobody has become ill or died from the effect of eating food derived from GMOs”.

He made his comments in an article in the latest edition of the FSAI newsletter. Regulating the use of GM technology in food production has been a contentious issue in the EU with strong opposition to the use of GMs for reasons such as the potential environmental impact, food safety and fears over the power of multinational companies.

Prof Reilly said this meant the application of GM technology in Europe had stalled, while GM crops were widely grown and marketed in other parts of the world. “Despite experiences elsewhere, Europe remains a reluctant user, even as the technology has evolved over the past two decades and gets more sophisticated.”

He said the concerns of anti-genetic modification protagonists were taken on board in Europe where “a complex and comprehensive regulatory regime” had been introduced. The European Food Safety Authority (EFSA) was one of the world’s foremost scientific, independent risk assessment bodies and no GM foods could be authorised in the EU without a scientific evaluation from the authority.

Prof Reilly also said a European Commission-funded review of a decade of research on GMOs had concluded “that biotechnology, and in particular genetic modification, is not per se riskier than conventional plant breeding technologies”.