Festival fever as Litfest tickets sell out in minutes

Booking opened at noon today for the annual festival of food, drink and literature and for some events the sold out sign is already up 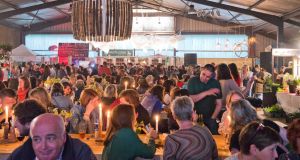 Tickets went on sale today for the fourth Kerrygold Ballymaloe Literary Festival of Food and Wine which takes place in May. Photograph: Joleen Cronin

Tickets for the fourth annual Kerrygold Ballymaloe Literary Festival of Food and Wine (May 20th-22nd) went on sale today at noon, and within an hour some events were already sold out. First to go were the guest chef lunches with Skye Gyngell of Spring restaurant in London and Joseph Trivelli, head chef at the same city’s River Café, and a pop-up dinner staged by this summer’s big hit restaurant, Mews, in Baltimore.

But there are plenty of tickets available for the cookery demonstrations, readings, panel discussions and the fringe festival at the event, hosted by the Allen family, which was attended by 8,000 food and drink enthusiasts last May.

New this year is a series of short talks, presentations and panel discussions on the topic “Our food – what’s the story?” which will run all weekend at The Grainstore at Ballymaloe House. Half-day, full-day and two-day tickets are available for this (€50, €90, €170).

Restaurateur, chef and writer Yotam Ottolenghi returns to the festival and the demo kitchen for a second time, and this year will be accompanied by Ramael Scully, head chef at Nopi restaurant and co-author, with Ottolenghi, of the Nopi cookbook. The London restaurant scene is also represented by Jeremy Lee, head chef at Quo Vadis in Soho, who will give a three-hour demonstration at the cookery school.

Cooking over fire is a theme common to the chefs involved in two of the other headlining demo sessions. Argentinian chef Francis Mallmann’s 2014 book Mallmann on Fire saw him cook on a portable solid fuel stove in locations from New York to Paris, via several countries in South America. Eric Werner and Mya Henry left behind careers in New York to open Hartwood in Tulum on the Yucatán Peninsula in Mexico, where they cook over wood in a restaurant that they describe as having “two and a half walls” and which has sustainability as its core message.

For full programme details and to book tickets, see litfest.ie