Brewery has a symbiotic relationship with the locals, who are crucial to its success 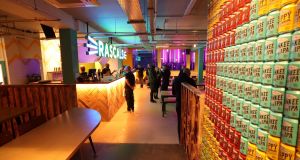 Inside Rascals brewery and pizza restaurant in Inchicore

Rascals Brewery was founded by Emma Devlin and Cathal O’Donoghue in 2014. In November 2018 they moved to a new brewery and pizza restaurant in Inchicore. “Our local following is absolutely huge,” says Joe Donnelly of Rascals. “It makes up 50-60 per cent of our business. We are very involved with [St Patrick’s Athletic], clean-ups and other local events. Everything we give comes back tenfold – the goodwill is brilliant.”

The site, a large industrial unit in Goldenbridge Estate, had been unoccupied for 16 years, so it took a huge amount of work to convert it into a brewery with 120-cover pizza restaurant attached. The interior is big and brightly coloured. Inchicore is three times bigger than the original Rathcoole brewery. “It is going great; there have been a lot of learning curves between the hospitality industry which is very challenging, and the brewing, which is also challenging. Put the two together … Everyone has put in the hours. There is a great atmosphere. If mistakes are made, you just learn and move on.”

“January and February this year have been good, given that the first two months of the year can be a real killer – so we put on events and do promotions to get people to come to Inchicore.”

Recently, the brewery released the latest in a long line of special beers. I loved the Judge Juicy New England IPA, 6 per cent ABV, with heaps of tasty hoppy tropical fruits and a nicely refreshing citrus edge. It is brewed with a mix of Cascade, Amarillo, Mosaic and El Dorado hops – a very satisfying thirst-quenching beer with real interest.

I was less taken by the Milkshake Stout, but I am clearly in a minority on this. Brewed with coconut, vanilla and chocolate, it is creamy and rounded with the rich flavours of all the above. “The Milkshake stout was brought back by demand,” Joe tells me. “It’s a cliche, but it’s true. We couldn’t ignore the number of customers who wanted to know when we were bringing it back. So we decided to start the new year with the return of an old favourite, plus something brand new.”