Coffee pods: ‘better than instant’ but they’re not the real thing 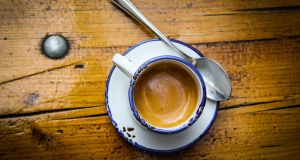 With more and more people now owning a pod coffee machine, “craft coffee” has now appeared on the radar.

Nespresso-style coffee pods may be more expensive than ground or instant coffee but we’re willing to pay the premium because they’re a quick and easy way to make coffee. Plus, George Clooney prefers pod coffee.

Pod machines are now common sights in homes, workplaces and hotels these days but soon may be in our coffee shops for those people who have grown accustomed to the taste of pod coffee from home or at work.

The attraction is obvious: there’s no fiddling with messy grounds, and they’re quick and generally reliable. And, tastewise, they would be up the scale from instant coffee.

Pod coffee is not just a huge growth area, but Nespresso machines are now found in the kitchens of more than 30 per cent of all Michelin-starred restaurants.

Starbucks will enter this new market this year by offering a range of their flavours in pod form in Irish and British supermarkets so you can now have Starbucks in your own home.

With more and more people now owning a pod coffee machine, “Craft coffee” has now appeared on the radar. Some in the speciality world see a gap for higher quality pods produced by independent retailers and thus having a certain social cachet.

Cult coffee shops, such as Collona and Smalls in Bath, UK (colonnaandsmalls.co.uk) are soon to offer their own artisanal coffee pods which are compatible with Nespresso machines on a subscription service.

It can’t be long before offering a guest a dreary old Nespresso coffee will be tantamount to offering them a bottle of Smithwicks or a glass of Liebfraumilch.

There is now an “organic alternative” to Nespresso pods, available at artizancoffee.com.

Such is the maturity of the pod coffee market already, that similarities are being drawn with the craft beer success story.

But is Pod coffee just a quick microwave version of the real thing for people who like to think they’re busy but actually aren’t? One of the leading Irish coffee experts, Brian Kenny, who has trained more baristas than he can remember and has represented Irish abroad in coffee competitions, says the ease and convenience for the home user are hard to beat.

“You just insert a pod and press a button and you get the same beverage over and over again. But this convenience comes at a cost – not just to your pocket but also to the quality of the coffee it delivers.”

Kenny owns Silverskin Coffee Roasters, which operates a wholesale shop in Glasnevin and a retail outlet in Ballsbridge. He says that even within the speciality coffee industry where baristas are held in high esteem, “the trend now from machine manufacturers is leaning towards ‘volumetric’ measures with espresso parameters based on a fixed ration for a desired extraction yield. The argument here is that the machine can dispense a fixed amount, rather than relying on a barista with a weighing scales”.

He points to the fact that espresso equipment is costly and making good coffee at home is time consuming and can be messy: “Many elements are to be considered when using traditional espresso machines at home: water quality grinder selection, tamping etc. Most consumers find this too much bother but others who really like their coffee would disagree”.

Kenny’s professional opinion is that Nespresso-style coffee is much better than instant coffee but not as good as fresh roast and ground coffee from a home espresso system.

“Perhaps the happy medium for home users is the humble french press, an aeropress of a filter coffee machine such as the Clever Dipper. You’ll need a grinder to grind fresh coffee but you can get the sort of flavour that Nespresso-style coffee simply can’t offer,” he says.

Like any home equivalent of a popular product then, it’s up to the customer to weight up time, effort, price and convenience. As with many coffee connoisseurs Kenny is surprised by how quick pod coffee has got such a grip on the market but he points to the soft underbelly of Nespresso-style coffee: the environmental damage.

Earlier this year, authorities in Hamburg, Germany banned pod coffee use from the city’s council buildings on environmental grounds. Their report stated that “these portion packs of coffee cause unnecessary resource consumption and waste generation and often contain polluting aluminium”.

Pod coffee capsules are difficult to recycle because a lot of them contain either plastic or aluminium. Such is the mounting concern about environmental damage caused by pod coffee capsules that last year an Italian producer, Caffe Vergnano, loudly trumpeted it had developed a capsule that could decompose naturally.

This problem is not going away: the man who invented the American coffee pod, John Sylvan, now says he bitterly regrets having done so due to the environmental damage they are causing.

These days Sylvan doesn’t even own a pod machine. “I feel bad sometimes that I ever did it,” he says. “They’re expensive to use. Plus, it’s not like drip coffee is tough to make.”