Celtic and Korean cuisine come together in a new cookbook 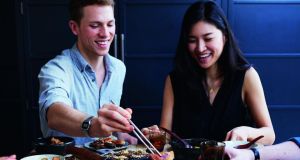 It’s a long way from Dún Laoghaire, Co Dublin, to Gangnam, Seoul (the place that inspired the viral music video Gangnam Style), and the connection is Irish/Korean couple Jordan Bourke and Rejina Pyo (right), who have published a book, Our Korean Kitchen.

The kitchen in question isn’t in Seoul, however, it’s in West Hampstead, London, where Bourke, a food writer, private chef and food stylist who grew up in south Co Dublin, and Pyo, a fashion designer from Seoul, live and work.

They met in 2008 in a bar in London, where Bourke studied film and television (it runs in the family; director Alan Gilsenan is a cousin) and Pyo was completing a Masters at Central St Martins. Three years later they got married, not once, but twice. Bourke, a Ballymaloe trained chef who worked with Skye Gyngell at Petersham Nurseries, explains: “We married in Ireland in December 2011 and Jina’s family came over for that, and then in April 2012 in Seoul and all my family travelled over.

“That was amazing, to introduce my parents to Korea. South Korea, and Seoul in particular, is the most fast-paced, efficient, forward thinking, futuristic city. It makes New York feel positively parochial.”

The couple work together on some aspects of Pyo’s fashion label, with Bourke involved in the logistics. “Jina’s stockists are worldwide, and we manufacture some of the production in Seoul, so we go there for a few months each year. I do stagiaires in restaurants and write from there too.”

With two successful cookbooks to his name, it seemed a natural progression that Bourke would harness his Korean experience. “We have been thinking about this book for years, so we carried out research on each trip. Last year we spent a month travelling around Korea, working with chefs and artisan food producers: people who make gochujang, doenjang (fermented soy bean pastes), kimchi, and pickled fruits and vegetables served as side dishes.”

The result is a beautifully shot book that goes beyond recipes into the origins and culture of Korean food. “Their food culture and history is enormous, and so rich and varied. We really wanted to honour the country and food culture,” Bourke says.

The couple spend a lot of time in the kitchen. “Jina only really cooks Korean food, where as I cook both Korean and Western. Jina is a really good cook and I trust her palate implicitly; she has a history and an ownership of the food that I don’t yet have, even after years of cooking it.”

Pyo is more direct: “I love some of the Mediterranean dishes Jordan cooks. I used to think he was crazy, the amount of olive oil he uses. But now I love it too. I am the boss of Korean food though.”

They acknowledge the influence of their families. Bourke describes his mother, Isabel Morton, an interior designer and writer, as a natural cook, who was cooking “very authentic Thai, Japanese, Indian and Spanish food” when things were “still a bit meat and two veg”.

“I learned a great deal from Mum. We used to do our homework at the kitchen counter, opposite the hob. Without even realising it, we just took everything in.”

In Korea, “it’s not very common for men to cook”, Pyo explains, though she says her father breaks the mould. So what do her parents think of their Irish son-in-law and his fascination with their cuisine? “At first they thought it was very strange. But now they are a lot more interested in teaching him Korean dishes than me.” Our Korean Kitchen by Jordan Bourke and Rejina Pyo (Weidenfeld & Nicolson, £25)