The young staff show no fear in the face of throngs of people – smiling, laughing and switching languages with ease as they champion local beer and food 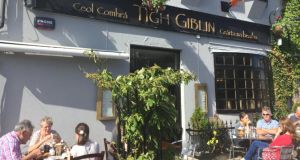 We’re drinking pints of Bogman in the baking sun outside Tigh Giblin in Spiddal when Brenda Giblin, the landlady, comes out and offers her customers sunscreen. It’s a simple gesture but a charming one and those of us on our first visit are immediately won over. It’s only 14 months since Brenda and her husband Ned opened the doors of Tigh Giblin, taking over from the Mac Gabhann family whose son Kevin now brews the Bogman Ale we’re drinking.

Although relatively new to the village, Brenda and Ned come with an impeccable pedigree. From Tralee and Eyre Square in Galway respectively, they ran three pubs in San Diego before moving home, and another in Boston before that. They had met in this most Irish of cities 25 years before, when Ned was on a Morrison visa, and have lived and thrived in the bar life ever since.

Despite the fantastic reputation Tigh Giblin is getting for its food, Brenda is determined to keep it a pub first – food is just something they happen to do incredibly well. She loves the welcome and freedom that a pub setting provides and talks with passion of the music that becomes the pub’s signature in the evenings.

Ned is a musician and locals talk with excitement of him coming out from behind the bar to play and sing. They have music seven nights a week in summer and four in winter and every kind of musician can find a home here.

The staff, mostly young local people, are all Irish speakers – a pre-requisite to work here, Brenda says. They show no fear in the face of throngs of people – smiling, laughing and switching languages with ease as they champion local beer and food. Competitors take note: the bar has been raised.