Oasis of calm on the banks of the Grand Canal 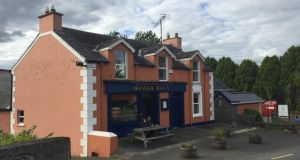 The Hanged Man’s pub: the restaurant, with its great steakhouse menu, has carved a modern niche.

When Pat Keane was 15 he could occasionally be found sleeping on the leafy banks of the Grand Canal in the shadow of the historic Hanged Man’s pub. He took his first drink at the bar and those teenage slumbers may well have conjured dreams of the day he would make this 120-year-old pub his own.

It took many years of business and life overseas before he took up residence but, when he walked through the doors as a prospective buyer 16 years ago, he knew it had to be his.

You can get a taste of that sense of certainty too. The sheep holding the approach road that cuts through the Curragh are the first signal that you’re entering a place apart, just 10 minutes from Kildare town. The trees, the wide-open sky and the flatness of the landscape converge beautifully on a humpbacked bridge over the canal and there you’ll find the pub. (The story goes that a jilted boatman, returning home to find his lover had married another, is the poor hanged man who gave the pub its name.)

The pub itself is wonderfully calm, stuffed full of atmosphere and with welcoming, long-established staff. From inside, you can watch the water flow slowly past as dogs run, couples stroll and children carve out childhoods on its banks. A baby grand piano holds one corner, a long wooden table designed to bring neighbours and strangers together in conversation stands nearby and there’s space to dance when the landlord calls a tune.

Music is central – traditional sessions on Mondays and bands once or twice a month, but it’s the restaurant, with its great steakhouse menu, that has carved its modern niche. Horse racing is the only reason to watch TV here. Join them for Sunday lunch soon and feel the world unwind.