Recycling, reusing and reimagining waste into new clothing and accessories

Alice Halliday hates waste, so she transforms it into beautiful things 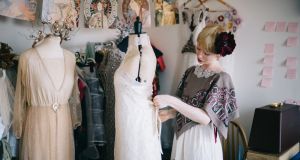 Alice Halliday at work draping on a mannequin

Alice Halliday hates waste. “I use old things to make new things,” says the fashion designer and stylist, a southern star based in Skibbereen whose philosophy embodies the current mantra of recycle, reuse and reimagine in imaginative, innovative ways. A family upbringing of make do and mend is deeply ingrained in her material-based perspective, using fabric remnants, old lace curtains, tablecloths, doilies and scarves to beach combing finds.

In her creative hands these are transformed into dreamy pieces which embody “the spirit of modern power dressing,”she says, being ethical, ethereal and elegant. Even at 11 she was making little collections of accessories, turning vintage tablecloths into handbags and shop window displays into belts. “I design organically in 3D, draping on the mannequin, and there is minimal waste as I use the whole piece as is or cut into sections, and give any scraps to other creatives for their artwork.”

Since setting up her own label - after winning Designer of the Year at Cork Fashion Week with a collection called Tea with Tamara, inspired by the Ballets Russes - she has been steadily developing a reputation for bridal dresses and accessories, her sumptuous crown headpieces made from vintage fabrics and broken china being particularly sought after for wedding days.

Halliday comes from an artistic background. Both parents are artists – her father Tom is a cartoonist and her mother Claire a fine artist, whose sister is a London-based interior designer. Another aunt is an applique artist.

“My grandmother, who lived by the sea in Devon, was a seamstress who made all her own clothes and her wardrobe had an amazing collection,” says Halliday, whose parents came to Ireland from Bristol when she was a year old, having bought a derelict 200-year-old farmhouse in Castlehaven which they later restored. “I grew up with nature all around me, which has always been an inspiration.”

After school, she studied art and design, specialising in fashion and textiles in Leamington Spa where her grandfather had been head of art. There she won Student of the Year in 2007 with a collection fashioned from old J cloths, rubber gloves and dishcloths, driven by a concept of using objects that could be transformed into clothing. That was followed by two years in the University of Creative Arts (UCA) in Epsom for a degree in fashion design and innovation.

A cape made for her graduate show from a £2 charity shop tablecloth, which she embellished with beads, crystals and sequins, attracted the attention of Florence Welch’s stylist, resulting in the singer wearing it on her Australian tour in 2010. “That was the year I graduated, and it was a dream come true and created a buzz. I even got it back again after the tour and it remains precious,” she says.

Apart from her made to order bridal dresses and accessories, she also teaches how to make crown headpieces in the Pink Moon Café and the West Cork Craft Centre and is always on the lookout for materials. “I am always collecting or gifted things. I got a huge box of fabric remnants from a fashion designer friend and these things are really special because there is a history behind them, so why not use them? The waste problem is heartbreaking.”

This collection of evening wear, her latest, displays the sophistication of her approach not always evident in many recycled collections. She calls it Edge of Nineteen and describes it as having a hint of 70s and 80s style. Each item is one of a kind – versatile enough she argues, to be dressed up or down and to last and be treasured, she says. Find the collection in Om Diva in Dublin, or online at www.alicehalliday.com. Her pieces can also be found in Wild Design in Cork and Killarney, as well as in Bauhaus and Mardyke Magpie in Cork.

Is my drunken, abusive husband capable of change?
8