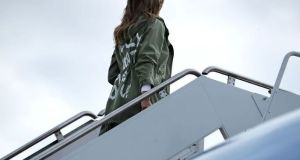 America’s first lady Melania Trump has come under fire for boarding a plane to visit an immigrant children detention facility in Texas wearing a jacket with the words “I really don’t care, do U?” emblazoned on the back.

While her husband, US president Donald Trump, is known for his off-the-cuff remarks, Melania Trump, mostly, stays silent, leaving us to interpret meaning from her facial expressions, body language and her clothes.

As a former model, the First Lady is well aware of how fashion can be used as a key messaging tool. Her previous sartorial choices have all been very considered and any political comment comes highly veiled.

For instance, when rumours of her husband’s affairs came to light, Melania hit back in style with a cream Dior pantsuit which was alleged to be a tribute to the suffragette movement. Another one of her most talked about fashion-choices came at the height of Trump’s comments about grabbing women by the genitals, when the First Lady turned up to the presidential debate in a pink blouse topped off with a pussy bow.

“I REALLY DON’T CARE, DO U?” written on the back of Melania’s jacket, refers to the Fake News Media. Melania has learned how dishonest they are, and she truly no longer cares!

Yesterday though the message was loud and clear, scrawled in white graffiti style writing on the back of her military-inspired jacket. It was a €39 green cargo jacket from Zara which predicatbly has since sold out online.

Shunning her usual sleek and upscale style,she chose a more casual mix of white jeans and Adidas Stan Smith trainers. A more apt choice for traveling, especially as she came under fire for wearing heels while traveling to help hurricane victims last year.

But, the jacket was absurdly insensitive and is a curious sartorial choice for the flight to a children’s detention centre. On any other occasion the outfit would have passed as a simple casual look. But she was inviting controversy wearing a jacket that literally spells out "I don’t care", while en route to meet immigrant children who have been separated from their parents.

She removed the offending item before she arrived at McAllen, Texas to take a tour of the detention centre. The First Lady’s spokesperson, Stephanie Grisham, tried to dismiss it: “It’s a jacket. There was no hidden message. After today’s important visit to Texas, I hope this isn’t what the media is going to choose to focus on.”

While some were speculating that the ‘I don’t care’ slogan was directed at her husband, Trump suggested in a tweet that the "I don’t care" message was aimed at the “fake” media.