Those bold knits, originally worn by hardy fishermen, are now beloved by celebrities 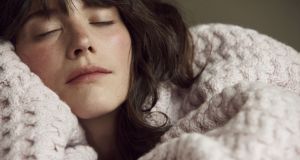 When the murder mystery thriller Knives Out premiered just before Christmas, it was the Aran sweater worn by Chris Evans that became its most talked about aspect. Once again, that tenacious image of Ireland scored internationally and set off a craze for those bold white cable knits that, according to costume designer Jenny Egan, set the tone of the film.

“It’s winter, and the knits lend a sense of comfort and give it a cosy feeling that contrasts with the suspense in the storyline,” she said. The rugged look and muscular masculinity of the sweater also had the ability to convey its own sense of strength and power, given its history as tough wear for hardy island fishermen.

The Aran notched up considerable recognition a few years ago when a traditional island knit from the 1930s, maker unknown, was part of 100 objects in New York’s Museum of Modern Art considered the most powerful and enduring of 20th century clothing. The jumper from Knives Out has been described as part of a new trend for the Statement Utility Jumper, though Egan was quoted as saying that “the wealthy can always wear white – nothing ever gets dirty”.

Knitwear made in Ireland is showing its strength in other ways at the moment, from Colin Burke’s exciting avant garde handknits, to big manufacturing companies like Ireland’s Eye, whose latest collection called Just Breathe is shown here.  Their 27 hardworking machines produce 600 sweaters a day, with 40 per cent of production for export – to Germany, Holland, France, Canada and the US.

The designer, Aisling Duff, a talented graduate of NCAD, has brought a youthful touch to the collection of some 60 pieces, which makes its debut at Showcase this weekend (at the RDS from January 19th-22nd).

“I try to have a bit of fun and bring in playful and unexpected elements,” she says. “The Aran is part of our rich heritage, and its 3D aspect, its cables and stitches can’t be replicated in other fabrics. I like to hold on to traditional stitches, but use them in contemporary ways. This collection is all about trans seasonal pieces that have an Irish look but are soft, light and wearable.” Yarns used are Irish and Italian; Donegal, Italian merino along with a new super-light wool.

Duff has concentrated on more fitted, feminine shapes for tunics, one-button cardigans, biker jackets and blazer styles in colours like botanical green, bramble, blackberry, cloud white and cornflower, that are modern in look but draw fundamentally from heritage stitches.

Chris Evans is not the first star to make a global impact sporting a chunky Aran. Fans over the years have included Steve McQueen, Steven Spielberg, Marilyn Monroe and Grace Kelly, while in various guises it has been seen on other celebrities like Olivia Palermo, Kate Bosworth, Nicola Roberts and Gwyneth Paltrow.

The trend for Aran knitwear has kept Irish machines busy and industry growth in double digits, according to Brian McGee of the Design and Crafts Council of Ireland, who recently opened a shop in Dublin Airport. The objects we make may describe without words who we are, but in an age when sustainable clothing is such an issue, the Aran is a star performer on that stage too.

Its starring role in movies, however, does have limitations, and we leave the last word to Evans, a star upstaged by a sweater. “That cable knit is a one trick pony,” he said. “Let’s see it pull off a beach scene. No range.”