Don’t feed the swans: pumped up for the all-male ballet

People used to walk out of ‘Matthew Bourne’s Swan Lake’ when they saw male-on-male dancing, and the eroticism is undeniable. Backstage, as heads are shaved and make-up applied, the scenes are just as colourful 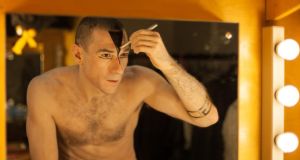 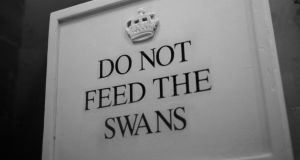 One of the props. Photograph: Peter Neill 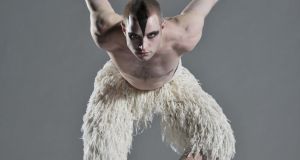 One of the 14 male swans in action

The most famous thing about Matthew Bourne’s Swan Lake is the trousers. The all-male corps de ballet dances bare-chested wearing what look like feathered pantaloons. The pantaloons are hanging now in the wardrobe department of Sadler’s Wells Theatre in London – the scene of countless girlish ballet fantasies. They are inspired by the ballooning trousers of Indian dancers, and each pair has a sort of ribbed corset top. The feathers look more string-like up close. There are 14 pairs hanging here, each said to have cost €1,000.

There are wonderful clothes in the wardrobe department – the leather-trimmed black velvet coat, a stiff black underskirt that the queen will wear later tonight, a sequinned sleeveless catsuit. But the trousers say everything about Matthew Bourne’s decision to make this traditional ballet new by having an all-male set of 14 swans; of the central love story becoming one of the prince and a male swan.

Bourne’s designer, Lez Brotherston, recently remembered in the Guardian how they had worked to emphasise the strength and maleness of the swans – hence the bare chests. That was back in 1995; the show has been running pretty well ever since. Its fifth international tour brings it to Dublin’s Bord Gáis Energy Theatre in February.

Wigging out backstage
In hair and make-up, Moira O’Connell, from Baltinglass, Co Wicklow, is redressing the wigs. The blocks on which the wigs sit are labelled “Cindy C Moth Maiden”, “Purple Party Girl”, and so on. About 40 wigs are used in the show, including nine little flicked-up black ones for the maids in the first scene.

“We come in every day to redress them,” says O’Connell. “But usually the swans do their own make-up. It’s quite a specialist matter.”

Backstage is the best place to sight-see, and we troop respectfully past an inanimate corgi and past a park bench that displays the sign “Don’t feed the swans”.

Tom Coyne is the stage manager, at the age of just 26. “Thirty-eight in the cast and 16 in the crew,” he says. Coyne, who is not long out of college, has never worked on a ballet before, although he has worked in London’s West End.

“This is the show I’m most proud of,” he says. “When I stand in the wings and watch it, it’s beautiful. That’s all there is to it.”

Plenty of women
Matthew Bourne’s Swan Lake caused such a sensation when it premiered that some of us assumed it was an entirely male version, with all female parts danced by men in drag. In fact there are lots of women here.

The piece, as well as being deeply romantic and tragic, is also witty – all the dancers, male and female, clown around with a technical precision you rarely see in Dublin. Sitting in the packed auditorium of Sadler’s Well on a rain-sodden week night, you see that this is joyous dancing, with none of the deadening predictability of the Russian companies.

At the interval, the audience is buzzing. The nightclub scene, where the dancers give us modern, cabaret-style dancing, is a particular talking point. They do this effortlessly, with such lightness that you can see that, for them, the choreography in this scene constitutes a holiday from the backbreaking work of ballet.

And backs do break. The company brings a physiotherapist on tour with them. Two principal dancers, tonight Chris Trenfield and Anjali Mehra, come every night and stay until it is obvious that there will be no injured dancers to replace. Tonight, the prince is taken off at the end of the first half, and replaced by an understudy. This is exactly how Trenfield started his career as the Swan, in 2009: replacing an injured colleague.

Tonight, sitting on the subs’ bench, as it were, Trenfield recalls that his professional career had already started as one of the Jets in West Side Story. “I had to wear spray tan for a year,” he says. He’s 6ft 1in, and about 13 stone; his weight fluctuates as he dances.

Trenfield was a midfielder in soccer, a flanker in rugby and a cricket all-rounder. “I would say this is the toughest physical thing I’ve ever done,” he says. “ With those sports you can show your tiredness, show you’re taking a breather. In ballet it all has to look effortless.”

Trenfield is from Gloucester, and hopes to catch a game when he’s in Dublin. He is also engaged to be married – his fiancee is also a dancer. He has very clear views on the story he is dancing. “People used to walk out when they saw male-on-male dancing. I think it’s more [about] attraction to a persona. I don’t perform it as two men in love.”

Is Trenfield is the only person in the world who doesn’t believe that this is a gay love story? After all, the prince and the swan first meet in a park at night (a context that can only Leda to one thing).

Actually, Matthew Bourne has said that he sees the story not as a gay love story per se but as a search for love. It is made pretty clear from the start that the prince’s mother does not love him (which makes her to blame for everything).

However, the sheer eroticism of the pas de deux between the prince and the Swan, and between the Stranger (the Swan’s alter-ego – don’t ask) and just about everybody else, makes the show. The prince is regularly and rapturously swept off his feet.

Aggressive birds
The savagery of the 14 swans, who with their shaved heads look like naughty babies, is also memorable. Their movements and aggression are very like real swans. Matthew Bourne watched swans for hours, he has said, and was greatly influenced by Alfred Hitchcock’s film The Birds.

No wonder, with this level of physical menace required, that male swans seemed the best idea. Like all fairy tales, this story is about turmoil; it is meant to be disturbing. But it is also steeped in ballet history. There is a sharp satire on traditional ballet in the first half, and in the second the Swan languishes for a moment in the same pose in which Nijinsky was photographed in L’Après Midi d’Un Faun. (Nijinsky’s costume for that ballet, the scandal of its day, more than a century ago, is also an influence on the Swan Lake trousers. It really does all come back to the trousers.)

Anjali Mehra was still completing her ballet training when she saw Matthew Bourne’s Swan Lake for the first time. It shaped her career. She plays The (Unsuitable) Girlfriend, one of the funniest parts. She also has a bulging disc and a ligament in her knee that never repaired. She is on the subs’ bench tonight. “Although everybody in the company has something,” she says. Dance, she says, is “the conversation you are having silently with someone”.

Anjali’s sister says that that’s s how all of us should communicate, all the time.