Community garden surfing on a wave of enthusiasm in Lahinch 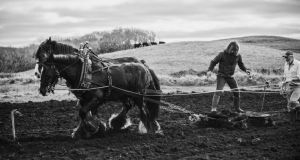 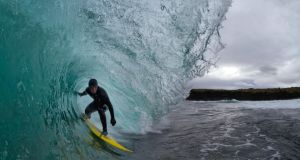 It’s like a scene from 1950s Ireland. Two workhorses are pulling a harrow across a field in Lahinch. But this is far from a typical farm. After all, Luka Bloom doesn’t usually turn up at many farms to play a gig to celebrate the harvest. He performed to 100 people at Moy Hill at the end of last summer.

The two-acre organic community garden is the brainchild of a group which includes Irish champion surfer Fergal Smith and Cornish surfers Matt Smith and Mitch Corbett. The latter two came to Ireland for the waves and never went home.

Fergal Smith’s name is well known to surfers here and in Britain, having won a raft of national championships. But the dozens of flights abroad to surf the waves sat uneasily with his environmental credentials. He was also feeling the pull to return to the land, having come from an organic farm outside Westport. “I always knew I’d come back to the garden at some stage. Then it hit me that I had to go back sooner rather than later and you can’t do that if you are flying around the world. So it was a combination of things.”

The emphasis is on promoting healthy and sustainable communities. They hold workshops on growing and cooking and work with organisations such as the Irish Heritage Council and the Seed Savers’ Association.

“Last year we grew about 85 different varieties of fruit and vegetables, including 26 varieties of potatoes,” says Matt Smith. “We have a full orchard including pears, apples, strawberries, blackcurrants and blueberries. We grew all sorts of stuff last year, such as carrots, broccoli, kale, spinach, celeriac, celery and beetroot. We’re trying out quinoa this year.”

They also dug out a space for an underground glasshouse which traps the earth’s heat during the night and allows the growth of tropical fruits. “The geothermal energy means that in the winter nothing gets really cold. This year we’ve planted avocados and peaches, figs and lemons.”

Last year’s harvest was given away to the local community and people were invited to make donations. “It’s making a big social impact here,” Matt Smith says. “We could get a field and grow vegetables all day long but if you don’t share what you are doing and inspire people to do it themselves then it’s just another farm.”

He estimates that thousands of people have visited the garden and Fergal Smith’s surfing and gardening blog and videos mean it has been seen by a couple of million more. “It’s pretty amazing how much impact you can have with just two acres of a garden.”

He swore he would never garden because he thought you would have to be away from the sea. “I was torn between surfing and gardening. But here in Lahinch you are beside the sea everywhere so we have the best of both worlds going on.”