Bridget’s children: ‘I can close the door and it’s just me and the kids’

Homeless for much of 2013, this family are overjoyed that they will be spending Christmas in a house of their own 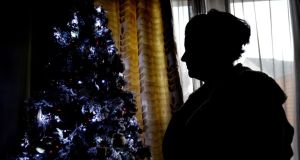 Gráinne and Finn wear slippers in their new house to keep the floors clean. Their slippers are neatly lined up in front of the washing machine, alongside their mother’s. In the living room they have a Christmas tree, which their mother, Bridget, bought in a charity shop. They have a garden. Gráinne now has a room of her own, where she can talk to her new friends on Facebook and play the guitar Bridget bought her at Lidl.

“Oh, this is going to be the happiest Christmas,” says Bridget, and she starts to cry again. Having a home means that “the sense of safety is unbelievable. I can close the door and it’s just me and the kids. That I can control my children’s environment. ”

“It was a nightmare. I thought we were going to be there for Christmas. When you’ve kids you do think of birthdays, of anniversaries, of Christmas.”

It was Gráinne’s 18th birthday in September, and Bridget had resolved to find a house for the family by then. She made it with four days to spare. She was helped in her endeavour by Focus Ireland and by the much-maligned social services.

For Gráinne, particularly, the new house has been transformative. “She’s just like a flower opening up,” says her mother. As soon as they moved in, Bridget found a cafe in the neighbourhood for Gráinne. “That night she came home and went straight on Facebook to her new friends. They’re nice kids there. They don’t wear make-up. They play pool.”

Finn is 10 and has autism. He has routines and obsessions about, for example, food. In the temporary accommodation Bridget had no access to a kitchen. “I was boiling pasta and eggs in the kettle.” Finn’s a messy eater, and Bridget would have to put a towel around him and feed him on the bed in the room the family shared.

Bridget was more worried about Gráinne, though. “The sibling of a child with special needs ends up as their carer. I saw that happening to her.”

The temporary accommodation was particularly unsuitable for a teenage girl: the family was left there because of a clerical error. Men from the pub came upstairs all night to use the lavatories, and the family slept with their suitcases against the door. Bridget forbade Gráinne ever to enter another person’s room, but she allowed her to use the internet connection on the landing.

Gráinne made friends in the temporary accommodation. Then one of them, a young mother in her 20s, hanged herself in her room. This had a devastating effect on Gráinne.

The search for accommodation was made more difficult by Finn’s condition. “You can’t have a house directly on the main road with an autistic child,” says Bridget. “You have to have locks on the windows . . . ” As it is, even in the new house, she had to take the headboard off Finn’s bed, because he was climbing on to it and hanging off the curtain rail.

One of her new neighbours came around one day to tell her that Finn was halfway out of one of the upstairs windows. The landlord fitted window locks for her.

Her landlord has been one of the great perks of the new house. “His girlfriend works with autistic children,” says Bridget.

Within an hour of moving in, the family was adopted by a local cat that tours houses looking for food. Finn likes to feed it ham – and ends up eating quite a bit of the ham himself, which delights Bridget, as he eats so few foods. Her aim now is to get him into specialist care, which she hopes will happen soon.

Their new home is in the town-house style. Gráinne has the main bedroom, at the top, and Bridget and Finn have the smaller bedrooms, on the floor below.

At night the children are in their rooms and Bridget can reflect on their new situation. “I put the alarm on and I get a big mug of tea and I watch the Real Housewives of everywhere,” she says. She feels happy.