Lending a helping hand to the 20,000 Luton Irish

From babies to the elderly, the Luton Irish Forum offers support for all 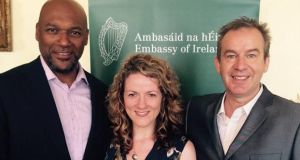 Noelette Hanley (pictured with Colin Salmon and Steve Abbott): ‘Half of men and a third of women report finding it easier to talk to an Irish worker about finances.’ Photograph: Luton Irish Forum on Facebook

For more than 20 years, Noelette Hanley has worked with the Irish community in the south of England. Now she is chief officer at the Luton Irish Forum in Bedfordshire, which helps people to be part of their community, secure Irish welfare benefits, find housing, and deal with debt and other issues. LIT helps to secure more than €1 million in benefits, grants, refunds and entitlements for its clients each year.

Are there many people of Irish heritage in Luton?

Luton has an estimated population of close to 20,000 Irish people. For almost 80 years Irish people have settled in Luton contributing to its development. After the end of the second World War many moved to the UK in search of jobs and a better life for themselves and their families. Luton offered employment at the Vauxhall car plant for many Irish immigrants and they played a big part in its growing success. In 1971, six per cent of the town’s population was Irish-born. The Irish community continues to make a valuable contribution, addressing the needs of disadvantaged and vulnerable Irish and others, supporting equal access to local services, fostering a vibrant sense of community and through their work with other communities.

The Irish community thrives through the support of several organisations such as Luton Irish Forum, the Mayo, Leitrim, Kilkenny, Galway and Monaghan associations, the Claddagh Gaels, St Dympna’s and St Vincent’s Gaelic teams, Comhaltas Ceoltóirí Éireann and many Irish businesses.

When did you go to England?

Graduating from Galway Regional Technical College [now part of the Galway -Mayo Institute of Technology] in 1995, I made the journey from the west coast of Ireland to London just six months after graduating.

During my time in Ireland, I worked part-time supporting people with special needs, which was incredibly rewarding and spurred me on to continue helping vulnerable people. When I came across an opening for support workers – working with people with learning disabilities and mental health issues – I jumped at the opportunity.

What kind of work did you do there?

I progressed to the role of service manager, which gave me the experience to get involved with the national Irish charity Irish Traveller Movement. The organisation was formed originally as a project of Brent Irish Advisory Service, which aims to raise the profile of the Irish Traveller community in Britain.

After getting married and having my first child, I decided to move out of London, settling in the nearby county of Bedfordshire. I commuted to London for the first few months of living in Bedfordshire, but decided to stay there when a local opportunity arose for the role of manager at Luton Irish Forum (LIF).

LIF was formed in 1997 as the Irish government was encouraging Irish people abroad to become more involved in the communities in which they lived.

I still remember being amazed by the dedication and proficiency of the group of volunteers on my first day of working at the Forum.

Their ambition was rewarded when they secured their own purpose-built premises after nine years of development. This helped to give members and volunteers a dedicated place to meet for their social club, exercise classes and the annual St Patrick’s Festival meetings, for example.

The three members of staff involved in Luton Irish Forum at the time were truly inspirational and are still part of the charity today. One member has retired but serves on the board of trustees, while two staff now head a highly-regarded specialist welfare advice service for local Irish people and other community members. Each year they work with hundreds of people in Luton and the surrounding counties to improve their income, housing and access to health and social care services.

Who uses the service?

The service is open to all communities who want information, advice and advocacy. We deal with Irish welfare benefits, support to attend medicals and tribunals, and accessing statutory services, housing, debt issues and community care, as well as providing a number of other services. We also have an online information source for Irish and Polish people who are considering moving to or who have just arrived in Luton – thisisluton.com.

LIF research shows that almost half of men and a third of women report finding it easier to talk to an Irish worker about finances. We have particular language or forms of expression that others may not fully understand.

What do they get from Luton Irish Forum?

Many Irish people have a poor quality of life because of the inadequate incomes caused by low statutory and occupational pension levels. A lot of people are reluctant to claim benefits as they have had sporadic or unpensioned employment in manual trades or their cultural background is based on self-sufficiency. This is where Luton Irish Forum lends a hand.

Following support, four out of five clients knew more about options available and acted on advice. Most remained independent and had improved health or wellbeing.

Many Irish members choose to socialise with fellow Irish men and women, some getting two buses each way to our services. There is something for everyone at the Forum thanks to the work of the many dedicated volunteers.

What else does LIF do?

We manage an online archive – catchingtheboat.com – showcasing the working lives of the Irish that settled in Luton from 1940 to 1960.

The Forum also works with partners to provide classes in yoga, dance, Desmond (a self-help group for those with type 2 diabetes), a 50+ job club and a Polish advice drop-in and casework service.

Luton Irish Forum is also the only Irish organisation to hold the contract for local and independent consumer champion for health and social care services, Healthwatch.