‘Irish nurses are held in very high regard in Australia’ 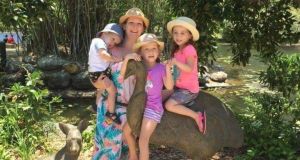 Jennifer Kelly and her three children in the Gold Coast Regional Botanic Gardens.

Memories of sunnier days spent backpacking around Australia led registered nurse Jennifer Kelly to move there with her family. The 38-year-old was tired of working full-time while bringing up her twins in a small apartment in Dublin with her partner. In 2013, they decided to give up their jobs and go.

What made you want to leave home?

We were living in an apartment I had bought when I was single in my mid-20s and, like many, I had thought I would sell it when I settled down and move into a nice three-bed semi-detached house with a garden. That didn’t happen so I was living with my partner and twin baby girls in a two-bedroom apartment, over some shops, in a never-ending housing estate. I used to leave for work in the cold and dark, dropping my kids off at crèche for others to mind. Then I would pick them up again in the cold and dark. They would be like demented banshees from exhaustion and, to be honest, I wasn’t much better myself.

My partner and I decided in 2013 we were going to accept an offer of sponsorship for him to work as a construction estimator in Australia.

At that time, I was working as a practice nurse in north Co Dublin full-time and he was doing part-time contract work.

Why did you choose to move to Australia?

Going back to the beginning of my story, I graduated from Beaumont Hospital in 2001 as a registered nurse. I initially worked for a year on a lovely renal ward, then left to backpack around Australia and the world with my best friend. It was what everyone seemed to do in those day. I fell in love with the country, living in Sydney and Melbourne earning my keep as an agency nurse.

Besides the obvious plus of the fabulous weather and chilled-out vibe, I was aware then what a great place it was for families. Life was lived out on the beach, with plenty of free family activities. There seemed to be playgrounds on every corner and everyone was involved in at least one sport.

But I left with my friends after a year and returned to nursing in Beaumont on medical wards and eventually in the emergency department. Emergency is not the easiest place to work and maintain your health and sanity. So I moved to general practice nursing, where I stayed for five years before I left, gaining great experience, meeting wonderful patients and making some fabulous friends.

How did you make the move to Australia?

My partner gained his 457 visa in February 2014 and we had left by the end of March 2014. It sounds simple but it was far from it. The most difficult thing I’ve done in my life to date was tell my parents, brothers and sisters, and my two best friends I was leaving. It’s still upsetting when you think about it. But we knew our options in Ireland were very limited and our children could have a better life abroad. We had to at least try, right?

So off we went, lock, stock and with two terrified toddlers on a 27-hour hour flight (not for the anxious or faint-hearted) with a heart like lead after saying goodbye to our families in Dublin airport.

We were incredibly fortunate that my partner’s brother and family live on the Gold Coast too and they moved us in and minded us for the first month, gradually introducing us to our new town.

How did you find a job?

I contacted a nurse agency called Carestaff Nursing Agency before I left and I had also organised my Australian nurse registration when still in Ireland. So when I arrived I just had to activate it and I was then officially interviewed by my agency. They have been a huge support and through them I have gained huge experience in hospital and community care. I am working as a nurse educator, teaching enrolled nurse students. To get this role though, I had to go to college and achieve a certificate in teaching assessment and education – not an easy achievement considering I was then on maternity leave with my baby boy, while looking after my daughters and working weekends.

Do you enjoy your new life?

Life here is amazing. We live 15 mins’ drive from the most beautiful beaches in the world and often spend our weekends there. We also live beside the mountains and national forests.

How does the Australian healthcare system compare to Ireland’s?

They are not comparable. Over here I can be paid from A$45 (€31.50) per hour for a morning shift to A$80 (€56) an hour at weekends. Here there is a maximum patient load in public hospitals of four patients per nurse. At home it would be double or triple that. Here, if you attend an emergency department, you are generally seen within the first hour, if not immediately. The wards are predominately single rooms with en suite facilities – again this is in the public hospitals. Some older hospitals may have rooms of up to four beds but it’s not so common any more.

Do you plan to go back to Ireland some day?

When I’m asked if I’d go back to Ireland to work, I say I’m not sure. Realistically I know it would be a huge disadvantage to my career, there are so many opportunities here for those who work hard. Irish nurses are held in very high regard due to our skill level, but also I like to think it’s because of the kind, friendly nature of the Irish.

Would you advise others to give Australia a try?

Would I recommend moving your life and family to Australia? I would say yes, but it’s not for everyone. There are many disadvantages to moving so far from home, such as being away at the time of family bereavements and missing out on births of babies and weddings. As well as being able to pop over to your parents for a cup of tea and some bickies.

In March I set up a Facebook group called Irish parents on the GCas it’s quite difficult to make friends when you a re an expat with young kids. There are 68 people in it now and we try to meet up regularly.

But beyond the homesickness, I give a little thanks each day for taking the risk to live in paradise and create a life for my family that they wouldn’t have known in Dublin.