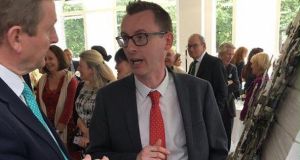 Last Friday, we were greatly honoured to welcome the Taoiseach to the newly built Irish Cultural Centre in Hammersmith in London, where I work. On what was a prominent week in the Taoiseach’s career, it was a poignant and memorable visit.

This occasion marked a coming together of Irish community in London with representatives of the local community and those with no Irish affiliation; it was a testimony to the wonderful work that has been put into creating the new Irish Cultural Centre here, thereby leaving a legacy to be enjoyed by the Irish Community in Britain for generations to come.

Enda Kenny was Taoiseach when the Department of Foreign Affairs initially made the grant of £550,000 (€636,000) to assist the Cultural Centre in buying the freehold from the council in 2012. This grant gave the centre the initial impetus in raising the additional finance to complete the purchase, and without it our task would have been unattainable. The new centre has been open since February.

The Taoiseach was accompanied by Ambassador Dan Mulhall, and spent time meeting the ICC Board of Directors, staff, volunteers and leading figures in the Irish community, including Dara O’Briain, who is one of our patrons. There were also local politicians, councillors and the Mayor and Mayoress of Hammersmith and Fulham in attendance, many of whom were integral in saving the centre several years ago.

The Taoiseach complimented the board of directors and staff for their achievement and emphasised the importance in supporting Irish culture and the value it brings both at home and internationally. He also explained that Irish culture was now at the forefront of Government policy, springing from the very positive reaction across the world during the commemorations of the 1916 centenary.

Chairman of the ICC, Jim O’Hara said the centre was grateful for the support the Irish Government.

“This is a lasting legacy for the Irish community in London which will be enjoyed for many generations to come,” he said.

He also announced that Hammersmith and Fulham Council had awarded the centre a grant of £191,000 to assist with the final fit-out of the new building.

The support that the Irish Cultural Centre has received from the local council and its collaborative initiative with Shepherds Bush Housing Association has been invaluable in creating the new Irish Cultural Centre. The Taoiseach thanked the local council, Shepherds Bush Housing Association, and all those involved in enabling the centre to move forward and creating opportunities to promote Irish Culture in London.

The Taoiseach’s visit was symbolic in its recognition of the Irish community in Britain and the vital role that culture plays in linking the Irish diaspora worldwide. We were honoured to host Enda Kenny and are very thankful for the work he has done to promote and recognise Irish Culture and artistic creativity abroad and at home.

Katie Walsh is assistant manager at the Irish Cultural Centre in Hammersmith. irishculturalcentre.co.uk

Michael Harding: Though I cheered for Biden, I was more like Trump than I could admit
Real news has value SUBSCRIBE