Nurses, come home to Ireland . . . and to a headache 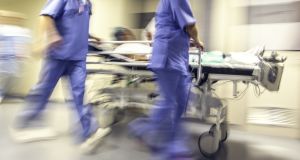 ‘It is right that we have high standards here’

Come home, nurses. We need you. That was the clear message of a two-year HSE recruitment campaign aimed at bringing back Irish nurses who had emigrated overseas, as part of a drive to fill some 1,000 posts.

But many nurses – particularly Irish nurses who trained abroad – say that getting registered in the Irish system is a bureaucratic nightmare. Some have simply given up.

A conference held by the Irish Lobby for Immigration Reform and Safe Home Ireland (an organisation that assists returning emigrants and those looking to make a move to Ireland) in October heard from nurses who have been waiting years to get registered by the Nursing and Midwifery Board of Ireland (NMBI).

Ciaran Staunton is president of the Irish Lobby for Immigration Reform. “We are hearing from returning nurses that they face a lot of obstacles,” he says.

“This is happening at the same time as an outcry about a need for more nurses in the Irish healthcare system. During the recession, one in four Irish households saw a family member emigrate; if the Irish Government are serious about welcoming back returning emigrants, why are there so many obstacles being placed in their way?

"There seems to be a real lack of empathy, and the right hand of Government is beckoning people back while the left hand is saying stop.”

But it does seem that change is afoot at the NMBI, and there is some support for the organisation from unlikely quarters. Liam Doran, general secretary of the Irish Nurses and Midwives Organisation, says that the NMBI has made good progress on communicating with nurses an midwives who are applying for registration.

What’s really going on? Are the NMBI being unreasonable, or are their strict requirements really necessary?

Angela Colgan is an Irish citizen who studied for her nursing degree at the Queensland University of Technology in Australia.

“Prior to starting the course, I rang the NMBI to see whether my qualification would be recognised in Ireland. I was told that they would only know when they saw the transcript, after the degree was completed. So I completed the degree and then applied for registration with the NMBI in February 2015. I found it very difficult to contact them and discuss my application process. In November 2015, I came home; shortly afterwards, I was denied registration.”

Colgan says that she wanted to meet the NMBI and discuss her options, but she was told she would have to go back to college in Ireland and complete a four-year nursing degree.

“I am now working as a healthcare assistant in a private hospital, but I miss working as a nurse so if nothing changes I am going to back to college and do the four years. I think it is crazy how you can be a nurse in one country and then not good enough for another. There are many of us in a similar situation.”

Catherine* also did her nursing training in Australia and worked there for a number of years. She and her husband decided, after 10 years, that they wanted to come back to Ireland.

“The process of getting registered in Ireland was so archaic,” she says. “It was €350 simply to apply and I had to get the Nursing Board of Australia, my university and the hospital I had worked in to fill out paper forms. Then it has to be sent in the post, but we rely on the hospital to send that post themselves.

"I got word back five months later and was told I would need to do a six-week adaptation course or pay €2,800 for a test. The nurses in Australia are amazing; it’s not like they have a bad healthcare system. They’re crying out for nurses in Ireland but the process is so unwelcoming.”

Jessica Clinton is yet another nurse who says she hit a brick wall. She moved to Australia when the Irish recession hit, living there for over five years. She studied nursing in Perth, and she always intended to move back with her children when the Irish economy picked up.

“I started my application in April 2016 and in 2017, after numerous attempts to contact the NMBI for an update, I finally got a decision letter. I was refused due to lack of clinical and theory hours. I was not offered an adaptation course or indeed any course to help me make up the deficit in hours, which I am more than happy to do.

"I don’t want to come home and be unable to work as a nurse. I grew up in Ireland and was educated here, including a Fetac pre-nursing degree and a Fetac diploma. I think NMBI need to change their requirements.”

Some of the problems with Australian-trained nursing graduates are because the nursing course is three years long, with a fourth year of training completed in hospital, and there can be a gap between clinical and theory hours that fall short of what is required in Ireland.

Mary Griffin, chief executive of the NMBI, has been in her position for a year. “We are making significant progress in tackling the huge increase in the number of overseas applications in recent years,” she says. “Each application is individually assessed on a case-by-case basis to include a full review of each applicant’s education and training programmes.

"This includes all pre-registration and post-registration nursing education programmes which are compared to Irish standards of education and training for nurses. The protection of the public is at the heart of the registration process. Where overseas applicants do not meet the required registration standards, they may be offered adaptation or aptitude tests.”

One nurse says that she has tried to secure a place on an adaptation course but that, while there are nominally 30 hospitals offering them, in reality only about five are running it at any given time. Griffin responded that there are 30 facilities offering these general nursing tests, but that it is up to the applicant or potential employer to contact a health care facility approved by NMBI to secure a placement.

Where clinical and theory hours fall short of what is required for registration, the NMBI has changed its standard operating procedure for assessment to include an applicant’s post-qualifying experience in full. “These activities must have included full responsibility for the planning, organisation and administration of nursing care delivered to the patient, and this must be verified by the employer.”

Griffin says that incomplete applications can be a challenge for the board, and that applicants need to send in a completed application form, identity documents and other supporting materials.

“We are strengthening our communication with registrants, the public and stakeholders and will continue to engage with all relevant stakeholders to improve the registration process. Applicants now track their applications online using their NMBI account.”

Liam Doran of the INMO says that it is right for Ireland to have high standards and that those who qualify outside the EU may have more hoops to jump through. “The paperwork has to be right. We don’t want to lower the bar. It is right that we have high standards here. The board has had problems with communication in the past but I think it is getting better.”

If you are a nurse who has moved back to work in the Irish healthcare system, what has your experience been like? If you are considering returning, what are the push and pull factors? We would like to hear from you. Share your story using the form above or by emailing abroad@irishtimes.com. A selection of responses may be published. Thank you.