‘I took my daughter to where I grew up. Maybe I was simply chasing ghosts’

‘I wasn’t sure what to expect. The smell of a turf fire? A discarded soccer ball or frisbee in the front yard?’ 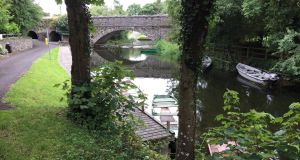 I suppose I should’ve known better. But one morning, back in July, my daughter and I walked the short walk to our old house in rural Ireland. I was quietly hoping she may have been a little intrigued about our destination.

Of course my old stomping ground was always going to be a bit of a step down from London, where we’ve just done the tourist things and spent the best part of a day wandering around transfixed at the Harry Potter wonder world at Watford. It hardly needed to be said that the village of Finea in Co Westmeath falls a little short compared to the majesty of Tower Bridge.

We are here in farming country with only scant signs of human activity. There is the unmistakable enduring smell of slurry being spread somewhere. I’ve been surprised to see the honeysuckle with its distinct scent, still there, still thriving on the side of the road, near Fagan’s gate. There are also elderberry, blackthorn, and ash and sycamore saplings, but regular hedge slashings have put paid to their upward trajectories. The only traffic, large lorries from Plunkett’s quarry, have us standing well back in the ditch as they trundle past weighed down with their loads of ready-mix concrete, sand and blocks.

I wasn’t sure what to expect. The smell of a turf fire? A discarded soccer ball or frisbee in the front yard? Maybe a neat stack of split firewood. Perhaps even an inquisitive collie or a cat stretched out on a windowsill basking in the sunshine. Or, maybe I was simply chasing ghosts. I’d find out soon enough.

On we go, past Mastersons and Dermodys. I glance up at Maol hill where my brother’s beasts are dotted like tiny Lego pieces in the top field, just below the remnant of the hazel copse. We’d head up there the following day. Around the bend and we are almost there, on the home straight. This section of road used to be the final hundred yards or so of our daily mile-long straggle home from school. Sometimes we’d summon enough energy to sprint the last 20 yards or so – anxious to get inside and retrieve our dinner from the bottom drawer of the range. For a few moments, I imagine I could almost be going home, one more time, only, of course, I’m not.

Originally a thatched cottage, the upper floor was added at a later stage, about a 100 years ago, which housed our family of 12. Its windowless grey gable is more weathered, more mundane than I remember. Inside, the three bedrooms upstairs and the 14-step stairway linking them to the downstairs kitchen and parlour. Those bedrooms with their rattling sash windows and wafer-thin glass were nigh impossible to heat. Jackdaws casually commandeered the two inactive chimneys at either end of the roof every spring. Keeping the kitchen warm in winter was a perennial challenge for our old Stanley No 8 that my mother was forever force-feeding with turf and wood. But for all that, it was our home for 30 years and I knew no different, and I’m still not sure I’d ever want to change any of it.

For years, the old man, a cautious man, had talked and talked about building a bungalow - for so long it seemed that we’d simply shrugged and dismissed his talk as mere wishful thinking. It became our running joke and we were happy to indulge his flight of fancy. But his dream finally became a reality in his final few decades, long after most of us had gone, after he reluctantly sold a few acres, and they moved the few hundred metres to where they had a view of the spire of the church in Granard. They too had joined the world of ubiquitous modern-day bungalow dwellers, scourge or blight, some would argue, of contemporary Irish landscape. But it was their very own bungalow with its double-glazed windows, central heating and pebble-dashed exterior walls and clever-shaped chimney crowns that thwarted even the most determined jackdaw. It was a house that could hold its own with any other dwelling in the locality and our parents were inordinately proud.

As we drew closer that morning, it was obvious no one was at home. I’d been told the house was up for sale. The curtains were not drawn. There was no sign of a car or even a bicycle, and the chimney was giving off no smoke. But at least the ancient fuchsia on the embankment was still going strong. Down the roughly quarried well-worn stone steps, we cantered, boldly, as if we still had some claim on this place and into the front yard that was now covered with crushed white rock– like the stuff that decorates some of the plots in the local graveyard. Everywhere was spick and span. The interior had been totally transformed. Schmick, to use an Australian adjective, is the description that came to my mind. Devoid of any clutter and now just a single open plan space, it seemed inconceivable that this was the same space where we’d been reared cheek by jowl.

Even the outhouse had been refitted with a shiny new slate roof, and a new door, painted a blood red. This shed, which also doubled as the old man’s workshop, used to be a repository for all manner of things; fishing rods, bicycles and in winters, an ideal place to hang pheasants and ducks bagged on Sunday afternoons during the shooting season. The ancient looking wheelbarrow sprouting clumps of red geraniums looked contrived, incongruous. And perhaps because of all these faux additions, the place had taken on the unmistakable feel of a weekender or a bolthole that was devoid of any emotion or character.

Year after year, in all kinds of weather, and especially when the back field was too soggy, my brothers and I seized every available opportunity to kick a ball around in this yard, honing what we imagined were our putative soccer skills, as if we might be the next Frank Stapleton or Kenny Dalglish; while our mother fretted that at any given moment an errant ball could well come smashing through the kitchen window. Occasionally, we came close, but the modest size of the window meant it always escaped unscathed.

The sense of quiet that morning was unnerving. Ghosts of my crowded childhood were barely below the surface. We should go now, I had told my daughter, and I was surprised by my impatience. There is nothing to see here, it’s changed too much, I added, as if to explain my need to get going. She shrugged, indifferent, offering no protest and we turned and headed towards the stone steps, and before I knew it, we were away back down the road, where the superior pebble-dashed bungalow and its well-tended lawn, and its view of the church spire, and our hire car awaited.

Why does Dublin rank only 120th out of 150 cities for raising a family?
Real news has value SUBSCRIBE