Can I answer honestly about whether I’m glad to be back in Ireland?

Coming home from Australia was hard. I wonder if I harbour a little resentment because we had to leave Dublin in the first place? 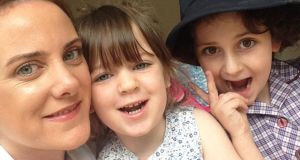 Rosie Murphy with Ruby and Jess: my children can now play with their cousins

‘Are you delighted being home?” Every time I’m asked that question I need to think. Should I be honest and risk insulting the person or do I smile and say, “Yes, it’s great”? It’s amazing how offended some people can be when I answer frankly, as if I have just said I don’t like their children.

My family, then of three, moved to Australia five years ago. I was a new mum, and my husband’s job wasn’t secure; with two mortgages hanging over our head we felt that we had no other option. People reacted with pity and despair when we told them we were leaving, as if we were off to the trenches. But we boarded that flight with hope and little fear of failure. What did we have to lose? We touched down in Perth and had two friends waiting at the airport.

It was difficult to settle at first, but when your future is hanging in the balance you have to dive straight in and invest everything in your new lifestyle, friendships and careers.

We called anyone we even remotely knew in Perth: a girl who owned a pub I’d been in a few times in Bandon, my sister’s ex-boyfriend, my hairdresser’s sister whom I had never met, a friend of a friend – anyone at all we could think of. The calls were always answered with a warm welcome. These people became treasured friends.

You see, when you move to another country you leave behind your family, so these people become your kith and kin. You lean on each other when times are tough, and laugh together when things are great. Regularly we would get a call asking if we needed a break from the kids, just as grannies and aunties would do if they were there.

If there was a roast being cooked in the Scarborough suburb, we were all invited, and when times were hard, there was always a bottle of wine being opened. I was so lucky to have these people in my life for five years.

I also fell into a career I loved, working under a manager who believed in me. A career in Ireland was something I had denied myself by prioritising socialising over studying during college. But you don’t tend to be pigeon holed in Australia. You are rewarded on work ethic rather than academic achievement.

We had a super work environment with many other Irish employees, and we all supported each other wherever we could. Where you went to school or what you did after is less important there and if you show initiative and drive as many of the Irish there do, you succeed. One recruitment agent once told me that many of the big firms were looking to employ Irish for this reason.

After five years things went quiet in Perth. Our options were Sydney or Ireland. I was devastated to leave Australia, but we knew that following a sea container around the world was no life for our little girls, so Ireland it was.

There starts the logistical nightmare of school enrolment, childcare and job searching. We’ve been quoted €2,500 for car insurance, as we’ve been uninsured in Ireland for five years. Banks won’t give us a car loan, because our job contracts say we are in six-month probation periods. Rents in Dublin are sky high.

But, three months back, we are now in jobs. Childcare and schools are sorted, and we’ve found a house to rent. My children play with their cousins, and my sisters and mum can watch my children grow up. With the cost of it all, though, I wonder how other families manage. With three hours a day on the M50 how do they stay sane?

Ireland still is a very special place, but I wonder if I harbour a little resentment because we had to leave. Those who stayed seem to have a special loyalty to the country too. I wonder if I’ll ever get over that love lost.

I have also come back a different person, which I wasn’t expecting. There were no preconceptions when you met people in Perth. They took you as the person you presented as, and for this reason I think the person I am today is far more grounded, confident and honest. Friends we left five years ago have also changed, and group dynamics are different from before. We have become parents and spouses, and friendships seem more an added luxury than a necessity now.

I have made a rule that, once a week, I call someone from my past and ask them how they are doing. Last week it was a dear friend that I hadn’t seen or spoken to for seven years. We spent the night in his home and laughed with his wife and kids. It was a joy and felt as if we had never been apart. Hopefully, investing time in friendships will ease the loneliness and void that being away from my “family” in Perth has left.

Honestly, yes; I am struggling. Today I met my cousin’s wife who could relate to what I was going through. She moved from Galway City to a country village when she got married and felt the same way then. She gave me the encouragement I needed, reminding me that it is early days yet, and that I should commit to the change and embrace it.

She is right. I can fester and wallow or I can suck it up and realise how lucky I am, with a wonderful husband, two beautiful kids and a lovely life ahead in Ireland.