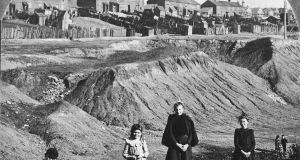 Children of miners pose in a strip mine in front of a row of houses near Hazleton, Pennsylvania, circa 1915. Photograph: Hulton Archive/Getty Images

Nestled on a picturesque plateau in the northeast of the US state of Pennsylvania, Hazleton is a city of some 25,000 souls. A decade ago it hit the headlines when it tried to implement laws designed to curb the area’s high rate of Latino immigration – if passed, its mayor Lou Barletta proudly declared, this would have made Hazleton “the toughest place on illegal immigrants in America”.

A federal appeals court rejected the proposals, but it was a sign of things to come in the US: Barletta is now a senator, and one of Donald Trump’s most vocal supporters. I’m guessing that neither is a man given to appreciate the ironies of history – one of which is that Hazleton was, essentially, built by immigrants.

We received an email from Hazleton resident Charles McElwee, who writes: “I work in the economic development sector in the anthracite coal region of northeastern Pennsylvania, which has a large population of Irish descended from Mayo, Sligo, and Donegal.”

Mr McElwee, whose own roots are in Ballybofey, has helped to restore the grave of a man called Condy Breslin, who died of “miner’s asthma” in Hazleton in 1880.

Born in about 1815 in southwest Donegal, on or near Loughros Point, a windswept peninsula outside Ardara, Breslin set off for the coalfields of Pennyslvania in about 1840. Carved into his gravestone – which Breslin’s twin sons, Neil and Charles, erected in St Gabriel’s Cemetery in Hazleton – are the tools of the mining trade: a crowbar, a shovel, a pick and a fishtail drill.

The “hard coal” fields of the eastern seaboard of America were a magnet for the poorest of the Irish poor, especially those from north Connacht and west Ulster. They settled in Hazleton’s “patch towns” – ghettos owned by the mining companies – and worked, not just at mining anthracite, but at digging canals to get the precious coal to New York and Philadelphia. Many of the Irish newcomers established their own ethnic enclave, Donegal Hill, close to Hazleton’s downtown.

It was tough, dangerous, badly paid work. But as Charles McElwee notes in an article on the Hazleton artist James Moran, whose family also hailed from Donegal, the miners’ hard graft prompted a rush of technological creativity and economic prosperity.

“Between the city’s incorporation in 1891 and the Great Depression, Hazleton transformed mining technology, became the third city in the nation to have a full city-wide electric grid, recruited a textile magnate to build the world’s largest silk mill, and pioneered an electric third rail later adopted by the Long Island Railroad.

“During this same period, Hazleton’s compact downtown blossomed with department stores, high-rise office buildings, a half-dozen theatres, and the first skyscraper in the state exclusively constructed out of steel.”

Charles McElwee’s article, published in The Atlantic magazine, acknowledges the darker side of Hazleton’s history. “In 1897, striking miners marching just outside Hazleton were massacred by a Luzerne County sheriff’s posse. The shocking event mobilised miners and, within five years, led to major victories for the United Mine Workers. Subsequent UMW strikes, compounded by a declining demand for coal after World War I, imperilled much of Hazleton’s economic health. Poverty, crime, and limited educational opportunities were also part of Hazleton’s urban milieu.”

In the 1960s and 1970s, the city’s redevelopment authority cleared out the Donegal Hill neighbourhood. The intention was to recruit new businesses and provide city-centre parking: instead, the area declined to the point where it became best known for violence, bars and drug deals. Since 2014, there has been a turnaround, and Hazleton’s Latino community has, like the Donegal miners of years past, become part of the city’s lifeblood.

With the US president’s immigration policies – indeed, his policies generally – being something of an unknown quantity, Hazleton faces an uncertain future. Meanwhile, in St Gabriel’s cemetery, Condy Breslin rests in undisturbed peace. Smiling in his grave, perhaps – for at 2,000 feet above sea level, Hazleton’s wild weather is not so very different from the windswept coast near Ardara.

To read more about Hazleton’s Donegal mining community, go to the Dublin Review of Books site, drb.ie, where Breandán Mac Suibhne has written a wonderfully evocative essay called “Them Poor Irish Lads in PA”. Charles McElwee’s piece on James Moran, “Haunted in Hazleton”, can be read on theatlantic.com.

If you know of an Irish connection which would interest readers of this column, please email awallace@irishtimes.com with details of the story, as well as your contact address.

Irishman in Sweden: Covid-19 testing is not widespread here
4