Reflections on Fidel Castro’s passing, from an Irishman in Cuba 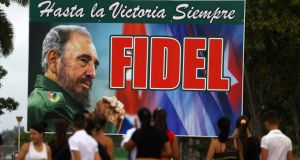 As a left-wing student in rebel Cork in the early 1970s I was an enthusiastic Fidelista. It was de rigueur to have that iconic poster of Che in one’s bedsit, but a Fidel poster was almost as cool. Fidel, perhaps because he lived, never quite achieved the same film-star status as the handsome Che, but his reputation grew with the Bay of Pigs and the Cuban Missile Crisis.

Over the next four decades Fidel was never absent from the world stage for too long, be it for the latest attempt on his life, or for his support for African and South American revolutionaries, or later for his more peaceful endeavours on socio-economic issues.

I first heard of Fidel’s death in my current home in Havana by telephone at 2.30am last Saturday morning. It was not unexpected, and, although nobody seemed shocked or surprised, it was still momentous news. We had no idea what would happen next. I first saw it confirmed in writing on The Irish Times website later that morning.

You cannot escape Fidel in Cuba - images of Fidel and Che dominate the urban landscapes in Havana and the other cities. Even in the countryside, their images or sayings are emblazoned across road-side billboards. In short, they are genuine revolutionary heroes (think Pearse and the 1916 leaders, Michael Collins and Eamon De Valera wrapped into one). And, not unlike our own revolutionaries, their post-revolution policies led to disagreement and strife, in Fidel’s case both nationally and internationally.

For me, Fidel’s lasting achievements were largely in the fields of health and education (areas where Cubans still enjoy world-class public services); in the high level of social and economic equality; and in the virtual absence of political corruption.

I can contrast that with my own experiences in Africa and Asia, where I saw first-hand the high- and low-level corruption and mismanagement that destroyed public services, while the mostly West-backed elites plundered the national resources as well as many well-meaning donor resources. But Fidel’s achievements were marred for many by the harsh civil restrictions and human rights issues.

I wondered how the international community would react to his death. How good it was to read our President Higgins’ generous statement, and those of other European leaders, and how sad to read US president-elect Trump’s hateful tirade - all without a trace of historical irony from a country that had installed and supported some pretty awful dictators in South America.

I was lucky enough to be invited as a “plus-1” to Fidel’s 90th birthday party (along with 4,500 others) in August this year, held in the Karl Marx Theatre. Of course he hadn’t been seen much publicly in recent years due to his age and ill-health, and so it was something of a surprise when he showed up in person. He looked very frail and stooped, and it took some time for him to walk to his seat. He was assisted by an aide, but walk he did. The adoring Cuban audience went wild, chanting FIDEL! FIDEL! FIDEL! and singing revolutionary songs.

Since the death announcement I have tried to gauge the broader reaction of the Cuban people. It was hard to take much from the gloating of some Cuban-Americans in Florida on CNN, reminiscent of some reactions to Margaret Thatcher’s death in the UK.

Here in Havana it has been a quiet period since his death and the nine-day mourning period were announced. The local (government-owned) TV and radio channels have been entirely devoted to Fidel’s life, and people have just gone about their business as usual.

On Monday huge crowds gathered in Revolution Square in long lines (perhaps two kilometres long while I was there) to sign the books of condolences. Tuesday saw an even bigger crowd, including foreign dignitaries, assemble there for Fidel’s final rally.

Fidel’s ashes have now begun the journey to his home province, Santiago de Cuba. Everything has been low-key, as if he wanted to be treated as nothing more than simply a Comrade.

My Cuban friends tell me that this is a period for reflection, and for showing respect for Fidel. Political discourse can wait for another time.

Irish connections to Cuba
Historically the Irish have been visible here. Count O’Reilly, soldiering for the Spanish, was the man that accepted the British surrender as they left Cuba in 1769; he married into a prominent Havana family, and went on to oversee a major upgrading of Havana’s forts and military defences. O’Reilly Street, named in his honour, is today one of the main thoroughfares in Old Havana – a brass plaque on the corner talks about our two island nations in Spanish, Irish and English. A memorial to Bobby Sands and the other hunger strikers stands in a prominent city park, not too far from the park where John Lennon sits on his bench.

Brendan O'Driscoll has been a governance and HR consultant for over 30 years, and has lived and worked in Africa, Asia, the Caucuses and the UK. Now semi-retired, he moved to Cuba with his partner in May 2016.