Nina Hynes: ‘Irish fear of the establishment is disintegrating slowly’ 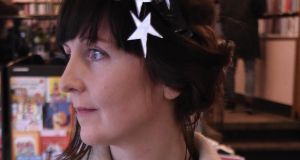 Nina Hynes: ‘Our sense of worth became about how much we were earning, as opposed to valuing a piece of music or art on its own merits.’

I’m from Dublin, the youngest of ten kids, and was given a lot of independence as a child. I left Ireland because I didn’t feel there was anywhere for me to grow. I was seeking to express myself without having to suck up to a shallow commercial mentality that developed as the system. I needed a place where I felt I could just be, where I could survive and have a better quality of life.

A huge part of Ireland’s nature is to hide behind the rock, let things pass. That’s why I love the recent grass roots movements, people on the streets. The fear of the establishment seems to be disintegrating slowly, layer by layer with each revelation of how the system failed us or actually kept us down.

Ireland is very much awake right now. It is on the edge of possibilities. People power is accelerating our healing process, solving problems with a collective energy. One of the reasons I was attracted to Berlin was the collectives, the energy of a group making things happen together.

What used to really get stuck in my craw in Ireland was how money became our new God and everything revolved around that, our sense of worth became about how much we were earning, as opposed to valuing a piece of music or art on its own merits.

We in Craw have something stuck about our heritage and we want to have a dance with the shadows and a conversation about what bothers us about those shadows. The intention is to clean up our own backyards, so to speak, so we can move to a greater vision. We can make something bigger together than when we do things alone.

Change begins with listening to each other and figuring out what needs to be done. I don’t think Craw could change anyone’s situation in Ireland. We are not doing anything new necessarily, although this will be a first for Berlin. But it could be the inspiration for a group of people to get together to discuss how they can grow their world despite the limitations of a capitalistic structure that is keeping them down.

I see Craw as a positive showcase of modern Ireland. A bridging of relationships. I like the idea of the old skins falling away and the essence of our strengths re-emerging so we can express how truly diverse and exciting Ireland is. I don’t like to rely on the clichéd image of Ireland. We are not a bunch of alcoholic leprechauns are we?

I’m from Ballyboden in Dublin. I came to Berlin in 2011 to write a play and I liked the idea of writing it somewhere else. I didn’t imagine I’d stay away. It’s almost seven years now.

At Craw I’m performing Two for a Girl, written by Noni Stapleton and myself, about a Traveller woman who has an affair with a settled farmer in 1940s Ireland, gets pregnant, is rejected by her family and abandoned by the father.

What’s stuck in my Craw: treatment of Travellers and women and the “homes” for unmarried mothers still revealing their horrors more that 60 years after the play is set. I know these same issues are stuck in people’s craws in Ireland. We’ve had enough, we’re talking about it, shouting about it, dragging it into the light. Craw will do the same through every imaginable art form.

Since the Waking the Feminists movement started in 2016 I have felt like as a society we have started to drain the abyss, the craw-clearing began. To paraphrase Tom Murphy, Ireland is raging against inequalities and the arrogance of power.

I think Irish people make sophisticated audiences in the arts. I don’t believe we look for just positive representations of ourselves. I’ve performed Two for a Girl in Berlin and Frankfurt and I imagine the Irish at home will also be interested in how it is received at Craw. The arts open up conversations and the themes are universal. Most of us are having the same conversations whether it be on a stage or at the bar, in Ireland or Germany. We’re angry because we care.

Recently I have been coming back to Ireland a lot and working on my ancestral line. Maybe you could call it “healing old stuff”, connecting with their essence through the natural world, be it with the blasting wind at Dollymount Strand or the sunrise at the rocks of Balscadden, Howth. This is what works for me. I believe that their memory and how they saw things lives in our own DNA.

We have the ability to break cycles, patterns and also rework the good things about our past. I think that Ireland is going through huge changes, a collective healing process, where a lot of the trauma of the past is coming out in the open to clear the old shackles of shame. I’d like to bring a bit of that to Craw with my band TAU, to be grateful and to channel some of that Summer Solstice Spirit! And the things I love about old Eriu! This is the first time we have worked as a collective and this festival is the first of its kind in Berlin.