Irish wrestler was World Heavyweight Champion for six years, while fighting in WWII 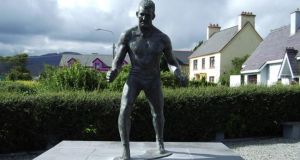 Steve ‘Crusher’ Casey is memorialised by a bronze statue in his hometown of Sneem. Photograph: Peter Dorgan/Wikimedia Commons

On December 7th, 1941 the Japanese Imperial Navy launched a surprise attack on the US naval base at Pearl Harbour.

In the wake of the attack thousands of men enlisted in the US armed forces, many of whom were newly arrived immigrants. They came from every corner of the globe, including Ireland, and a myriad of backgrounds, yet were eager to prove their loyalty to their new homeland. They chose to fight against those who sought to dominate the European and Asian continents.

Few had more experience fighting on a continental stage than 33-year-old Private Stephen Casey. An immigrant from the Irish Free State, he also happened to be the reigning World Heavyweight Wrestling Champion.

For Casey, success was almost hereditary. He came from a clan fondly referred to as “the toughest family on Earth”, and it wasn’t simple flattery that earned them the moniker. The scion of the family was his father Mike Casey, who had also left his native Kerry to make his name in the US.

While officially Mike’s job was to oversee and manage the fleet of racing boats of the nautically minded Vanderbilt family, he also earned additional income as the sparring partner of prominent boxers. His most notable opponent was The Boston Strongboy John L. Sullivan, former World Heavyweight Champion and himself the son of a Kerry immigrant.

His mother was no less impressive. Bridget “Mountain” Sullivan was a champion oarswoman, and their mutual fondness for athleticism may have been what drew her to Mike. Ironically, both had worked on the Vanderbilt estate at the same time but never met face to face until they returned to Ireland.

They were wed in 1908, and over the course of the next decade Bridget gave birth to seven sons. Each would prove to be a remarkable athlete, dominating the sports of boxing, rowing, wrestling and tug-of-war, both domestically and internationally. It is no surprise that Steve Casey rose to such heights when he had some of the world’s greatest athletes under the same roof spurring him on.

He and four of his brothers first came to wider attention when they easily won the Lakes of Killarney Salters Cup three years in a row, and then went on to win the All England Rowing Championships in 1935. Their victory meant they qualified for the 1936 Berlin Olympics in Nazi Germany, but were barred from the amateur competition as Steve and his brother Patrick had fought two professional wrestling matches earlier that year.

As members of the British amateur wrestling team they had also fought opponents across Europe, and proved so capable that they soon ran out of challengers.

Steve was encouraged to cross the Atlantic where he could pit himself against the greatest wrestlers of the era. He left in 1936, and within two years, had risen to become the undisputed AWA World Heavyweight Champion, a title he would hold six times in seven years, even during his service in the second World War. Thus the legend of Steve “Crusher” Casey was born.

Not content with dominating just one sport, he also dabbled in boxing and defeated the US Heavyweight Champion Tiger Warrenton, before issuing a challenge to legendary World Champion Joe Louis - one he apparently dared not accept.

Casey was one of the last true giants of “conventional” wrestling. His career bridged the transition from a purely athletic contest, to the semi theatrical performances we’re more familiar with today.

Yet he never struggled with the new ethos. A natural athlete but also a compelling showman, his signature “Killarney Flip” was a crowd favourite, as was his gift for understatement. Oft reported to declare “if you think I’m good you should meet my six brothers… they will outfight, outrun or outrow any men in the world” - he knew how to please the media.

His legacy as one of our greatest emigrant athletes is undisputed, and the Caseys’ status as the only family ever inducted into the Irish Sports Hall of Fame is an achievement unlikely to be surpassed by any other at home or abroad any time soon.

This Extraordinary Emigrants article was written by Nathan Mannion, senior curator of Epic The Irish Emigration Museum in Dublin’s Docklands, an interactive museum that tells the story of how the Irish shaped and influenced the world. epicchq.com