Irish Connections: The Cork woman was so fierce she was called the ‘walking wrath of God’ 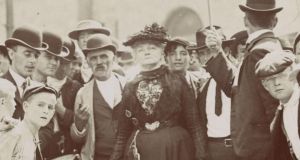 We only ask for justice: Mother Jones at the start of the Children’s Crusade, a walk from Philadelphia to Long Island in 1903, to publicise the conditions of children working in textile mills. Photograph: Library of Congress

She was a force of nature. One district attorney called her the most dangerous woman in the United States. The writer Upton Sinclair called her the walking wrath of God. But the left-wing firebrand remembered by history as Mother Jones was born simply Mary Harris, in Cork city, in 1837.

Harris was well acquainted with hardship from an early age. During the Great Famine she witnessed cartloads of emaciated skeletons being wheeled through the streets of Shandon for burial.

In 1847 her father got work in Toronto as a railroad labourer. Four years later the family joined him there. A bright student, Harris got a place at Toronto Normal School, a prestigious teacher-training college in the Canadian city. But she never cared much for that profession. In 1861 she married an iron moulder named George E Jones, and the couple settled in Memphis, Tennessee.

In 1867 a yellow-fever epidemic killed her husband and all four of their children. He had belonged to a trade union, and after his death it helped her financially – a kindness Harris wouldn’t forgot.

She moved to Chicago and became a dressmaker. But calamity struck again, when the great Chicago fire of 1871 destroyed her home and all of her belongings. She participated in the rebuilding of the city, becoming politicised in the process; she joined the Knights of Labour and the Socialist Labor Party.

But it took the Haymarket riots of 1886, in which violent clashes between Chicago anarchists and the police left more than a dozen dead, to radicalise her. When depression hit the US in 1893 Harris helped organise the march of an unemployed “army” from Chicago to Washington, DC.

She became a full-time union organiser, cultivating a grandmotherly persona as Mother Jones. At a time when workers had no rights, and armed private security guards frequently attacked any who dared to strike for better conditions, she pursued the cause of labour with almost superhuman vigour.

Asked, once, where she lived, Mother Jones replied, “Wherever there is a fight.” That was no exaggeration. In the last four decades of her life she travelled constantly around Pennsylvania, Ohio, Illinois, Indiana, West Virginia and Colorado, marching, organising, making speeches and deploying “broom and mop” brigades of workers’ wives to wage war against scabs and strike breakers.

She advocated for miners and factory workers. She believed in racial equality and campaigned to end child labour. She eschewed highfalutin debate, speaking in the plain language of the working man. She held her own in campaigns against Presidents Teddy Roosevelt and Woodrow Wilson and the industrialists John D Rockefeller and Andrew Carnegie. She lost more of these fights than she won. But along the way she secured valuable nationwide press attention for the causes she championed.

She had some idiosyncrasies. Her 1925 autobiography contained two falsehoods in its first paragraph alone. She overstated her age by seven years, claiming to have been born in 1830. She also claimed, falsely, to have lost “many of my folks” in the fight against British rule in Ireland. Somewhat less fathomable, however, was her earnest opposition to female suffrage. She believed in the traditional family, with the husband as breadwinner. In her view a wife’s role was chiefly to support her man.

In 1930 newsreel cameras were on hand for the celebration of her 100th birthday, even though she was actually 93. Footage on YouTube, titled “Mother Jones Speaks” (iti.ms/2nDiMBE), includes the only known recording of her voice.

Incredibly, 80 years after she left her native country she still spoke with an Irish accent. She died a few month later and was buried in the Union Miners Cemetery in Mount Olive, Illinois.

Today, an elementary school in Maryland, a historical museum in Illinois and the left-wing US news organisation Mother Jones are all named in honour of her.

Juggling a newborn, a toddler and a daughter with special needs in lockdown
Real news has value SUBSCRIBE