It's farcical to compare Dublin rents with London

How are we still saying that London is cheaper than Dublin for housing? 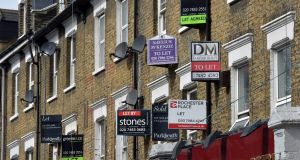 You’ll find plenty of property to rent in Camden, but expect to pay £3,000 for a two-bed flat, a reader says. Photograph: iStock

A report this week revealed that the average monthly rent is €1,784 on the south side of Dublin city, €1,690 in the city centre and €1,553 north of the Liffey. South Dublin is now dearer than parts of London for rental property, it was suggested. Not in my experience, says Dan Fitzpatrick, who compares his foray into the rental market in the UK capital with what’s on offer in Dublin, and further afield.

I am always surprised at the claims about how high the rents are supposed to be in Dublin. Apparently, South Dublin rents are now higher than in London.

I lived in London for more than 10 years and I long ago learned that comparing Dublin with London makes little sense.

London is a huge beast of a city and it can take a very long time to cross the city by public transportation. Crossing the city by private vehicle is prohibitively expensive and one can also expect huge delays.

There is almost no parking anywhere close to central London, and anyway, you would have to pay the special zone charge if you chose to drive.

Dublin is easy to get around by car. Yes, the city centre has its high-charging parking zones, but most controlled parking locations outside the city centre are poorly enforced. In Greater London your car gets towed if you are a minute over the parking you have paid for.

When you decide where to live in London, you look at the local rents, but you also look at amenities, transport links, council tax, and the cost of getting from your home to your work.

You also factor in where the food stores and supermarkets are, and you have to decide whether you will have a small car and pay parking permit charges (if where you live is allotted a parking permit), along with all the other costs, or go without. You then have to decide which borough you want to live in, as each charges a different council tax, paid by the occupier.

There are people working in London who spend more than £5,000/€5,924 a year just getting to and from work by train and public transport (and that is on a highly discounted season ticket). It is not tax deductible, so if your employer pays for your season ticket, you have to pay tax on it as if they had given you a pay rise to equivalent value.

Then you look at rental fees. If you want to live in central London you will pay a huge rent. Knightsbridge, South Kensington and such billionaires’ rows are out – unless you are in the market for something starting at £5,000 per month.

So let’s look at a location that is quite central, but not so swish – around Marylebone station, for example. When I looked for a place there, £1,200 was the lowest rent, and that was for a studio flat. It was clean but tiny, and grim – you probably could cook your meal while sitting on the bed.

The lowest price for a two-bed was £1,700. The second bedroom there was particularly small and the flat faced a noisy main road. Most other apartments were much more expensive, up to £3,000 for a two-bed.

Many people do not like to stay this close to town as it is so noisy and busy and there are zero amenities, such as places to walk, and possibly more crime. There may also be issues with schools.

So, you move out a little bit further, even though this might add 45 minutes to your commute each way. In Camden you can get cheaper flats, about £1,200 in certain places. They will often be former council flats with no amenities in locations prone to social problems. If you want something out of the combat zone, you will pay the same rent as in Marylebone.

Anything near a good local school, or an amenity such as a park to take the edge off the city grimness, and the rents shoot up. Within walking distance of Hampstead Heath, the cheapest two-bed flat I found was a ground floor of a tall, narrow Victorian house. It was renting for £2,400, even though the walk to the Underground is 20 minutes and there are some crime-attracting estates in the area. Council tax of £1,500 and the very high commuting costs are additional considerations.

In Dublin, two-bedroom apartment in the Sweepstakes, in Ballsbridge, still rents for around €2,000 (as advertised in February of this year), and you get a parking space included.

There is no council tax to pay, cable TV is included and the apartment is located in a gated community in pleasant parkland surroundings. There is even a sizeable balcony, and you are far from the traffic. Not to mention the short walk to the Dart and to Herbert Park and the city centre. Wow!

How are we still saying that London is cheaper than Dublin when it comes to housing?

I have lived in a number of places, where I run development projects. Typically, in some African countries where I worked, because of the shortage of properties in reasonable shape, rental costs are $2,700 for a two-bed apartment and $3,500 for a house.

Currently I am in Laos, where I live in a “cheap” property for which I pay $1,500/€1,380 per month, but this is a locally designed house where there are no ceilings, no double glazing.

If Dublin wants to overcome its housing shortage, assuming there actually is one, several things have to happen. First, the legal scenario has to be changed whereby tenancies longer than one year can be granted that do not provide any additional interest in the property to the tenants (no sitting tenants’ status and so on), that will scare off potential landlords.

Second, there has to be a mechanism by which landlords can get rid of troublesome tenants. There are a number of potential landlords who just do not want the bother and cost.

Third, the cost of letting is high – property tax, withholding tax on rent on top of that, plus all the costs that are involved in keeping a property up to code. For some potential landlords, the cost and potential stress is just too much.

There are plenty of people, especially those who had to move abroad to find work but who keep a small property in Ireland “for their retirement”, who could be persuaded to make it available. But many just do not want the hassle.

One way of dealing with this is to do what some councils in the UK do, which is to take a property on an agreed rental for a period of five years, after which the property is handed back in the same condition as it was received.

The council takes care of all the maintenance issues and pays a slightly less than market rent. The landlord is happy with the situation because of the guarantees and the lack of stress. Perhaps Dublin should adopt such a policy?

‘It was like somebody put a furnace in my core’: Michelle Obama on menopause
Real news has value SUBSCRIBE