Where’s the best place to live in the world as an expat? 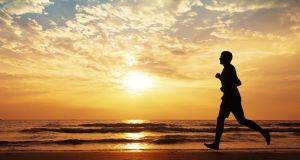 New Zealand emerged as the best place for quality of life, with 57 per cent of expat respondents saying they have become more physically active since moving there. Photograph: Thinkstock 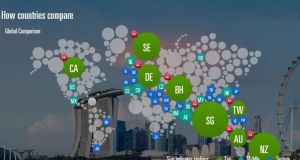 If you’re thinking about moving abroad, what factors are most important to you when deciding where to go? Is it the wages on offer, the type of job, the lifestyle or the climate? And how do you weigh up your options to find the best destination for you?

Each year, HSBC carries out an extensive survey of "expats" living all over the world, asking them to rank the place where they live according to certain criteria. While the survey is very much about the best places to live as an “expat” – the use of the term implying people who live abroad by choice, usually temporarily, often sponsored by an employer, and typically wealthy (the average annual salary for respondents this year was $104,000 or €93,300) – the results do provide some useful insights, particularly for people who fall into this category.

This year, out of a survey of 22,000 expats living in 39 countries, Singapore emerged as the best place to live in the world.

The Asian city state was voted into the top spot for its safe streets, plentiful job opportunities, high wages and the range of things to see and do. More than two-thirds of respondents living there said their life was better in Singapore than it had been at home.

Southeast Asia is the region with the happiest expat workers, with the Philippines, Malaysia, Indonesia and China making it into the top five countries for job satisfaction. Russia has the highest rating as the best place to learn new skills, and is also home to the most fulfilling expat jobs, according to the survey. 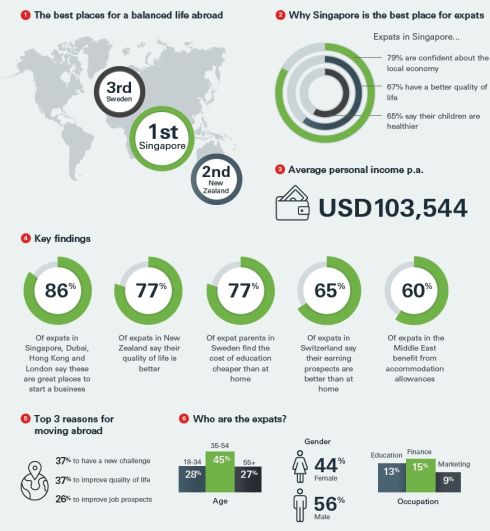 For those interested in employee benefits, the Middle East offers some of the best packages, according to the survey. Six out of ten expats living there receive an accommodation allowance, compared to just one-third of expats globally, while 67 per cent receive an airfare allowance for trips home.

If you’re looking for life experience, head to New Zealand, where 77 per cent of expats say their quality of life has improved since moving there thanks to family-friendly amenities and high environmental standards. The outdoor lifestyle and sporting culture is cited for particular praise, with 57 per cent of respondents saying they have become more physically active living there. Spain was voted the best place in Europe for expats wanting to enjoy life.

Entrepreneurs should look to the cities of London, Dubai, Singapore and Hong Kong, which respondents said were the best places to set up a business.

Families voted Sweden as the best country in which to raise children, with a family-friendly culture and respected schools. When asked about childcare, 79 per cent of parents who responded to the survey said the quality is better there than it was in their home country.

For expats looking for economic stability, Switzerland is the safest bet. Nearly four out of five respondents living there are confident about the Swiss economy compared with a global average of 48 per cent. More than half of respondents say it is a good place for career progression, and wages are also high, with respondents earning over $180,000 (€128,000) per year on average.

For work-life balance, the European countries of Germany, Sweden, the Netherlands and Switzerland top the charts, with expat workers saying career progression doesn’t mean having to sacrifice their home life.

Just 11 per cent of first-time expats go abroad because they were sent by an employer, compared with 20 per cent of repeat expats. Almost half of all first-timers say their new country has given them a chance to learn new skills, while a similar percentage find their work more fulfilling than they did at home. Over half say their work-life balance has improved. Australia emerged as one of the most popular destinations for first-time expats, ranking highly for lifestyle and as a good place to start a business.

Almost half say they felt at home within a year, with making friends the most important factor in feeling settled, followed by understanding the local culture. Learning the language is also important for expats living in a country where their first language is different to the local tongue. Retirees settle faster, with almost half saying it took less than six months to feel at home, compared to just one in three 18- to 34-year-olds.

The full survey is available to download at expatexplorer.hsbc.com, where interactive online tools allow users to compare destinations based on the criteria most important to them.

Paul Flynn: A wonderfully easy and logical way to feed your family
3