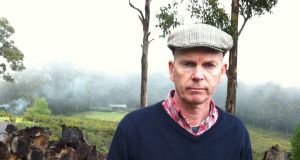 Philip Lynch: ‘Emigrating was always part of the equation in our family.’

When we were growing up our mother used to joke that one day we’d “be sending home the money”. Ma was convinced emigrants always made good. She’d talk about “legacies from America” our more fortunate neighbours must’ve acquired. These neighbours who’d added extra acres to their tiny holdings had obviously benefited from the largesse of US relatives. Ma’s light-hearted prophesies never eventuated. But she wasn’t bothered. It was likely her attempt to cast a positive spin on us going.

A frugal woman, she had a knack for squirreling away modest sums of money. On the morning I left, between sobs she pressed a palm full of pound notes onto me as I was heading out the door. She always bought her non-perishables in bulk at the Cash and Carry in Mullingar. With half a lamb or bullock in the freezer and home grown vegetables at hand, she was well placed to limit her grocery bills. A sack of flour for soda bread had pride of place in the porch next to the creamery can of buttermilk. Seldom was anything ever discarded.

Our putative economic prosperity aside, she always hoped that at least one of us would make the pilgrimage home every summer. We had a loose roster and an unspoken understanding that our visits home wouldn’t clash - and cramp each other’s style.

One year, hoping to take her by surprise, one of my sisters turned up, unannounced - all the way from Melbourne. Needless to say, Ma was wholly unprepared and put out by the absence of any forewarning. The lesson was learnt - from then on, we always sent word of our travel intentions well in advance.

Emigrating was always part of the equation in our family. Several of my father’s siblings emigrated; though curiously, no-one on Ma’s side. Going abroad was regarded as a better alternative; almost a coming of age ritual. It mattered little who held sway in Leinster House. I suspect many Irish people, and Irish politicians have always accepted that emigration is part and parcel of Irish society. Our working class family of ten children was always going to struggle to find work “at home.” So the eventual departure of six of her brood was hardly surprising.

Ma made do with those summer visits and long distance correspondence. She was only able to get to one wedding - one of my brothers, in London. Subsequent Melbourne and New York nuptials were beyond her comfort zone. She was happiest at home, drinking tea and listening to Gay Byrne in the mornings, while she kept tabs on the turf fire and an eye on passersby outside on the road to Finea.

Although she kept our contact details in a well-thumbed exercise book by the telephone, she only ever resorted to long distance calls if it was something serious. After I fractured my spine while cycling in Melbourne, I was astonished to hear her on the phone one night, anxiously enquiring about my health.

She was a prodigious letter writer. Her birthday cards seldom arrived late, even if the content was scant and, apart from a running commentary on the weather, she was loath to disclose anything about herself.

When she died, suddenly and to everyone’s shock, a few years back, my siblings and I started to drift even further apart. Not because of our far-flung locations. But rather, I suspect because we’d lost our matriarch.

My summer trips “home” had already become more infrequent. Modern day mortgages and raising children don’t go hand in hand with regular trips half-way around the world. No doubt Ma was disappointed with this slippage. I know she’d liked to have seen more of her granddaughter. But of course, she was tactful enough not to say as much.

I missed out on seeing her for what would’ve been the last time by a scant three months. I’d booked a March flight but she died in the preceding January in the winter of 2010. It’s a funny thing, your Ma - always there in the background. You just expect her to be always around. Of course I know I’m being irrational. But suddenly, in an instant, she’s gone, and that’s that.