Red Dirt, a thriller inspired by the lost Irish I met in Australia 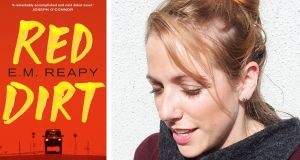 Red Dirt was inspired by Elizabeth Reapy’s backpacking trip around Australia in 2011.

I was staying in an apartment on the outskirts of Perth, rent-free. It belonged to FIFO (fly in, fly out) workers from Mayo and Offaly, and they let me have my own unfurnished room upstairs. There was a blow-up mattress but I found it more comfortable to sleep on the carpeted floor.

When the lads were in the mines working as quantity surveyors and engineers, I had the place to myself. This was pure luxury after backpacking and living in hostels, sharing dorm rooms and living spaces. It was so peaceful that I began to write the first story which would eventually prompt my novel, Red Dirt.

In 2011, when the book is set and I was in Australia, there were thousands of young Irish people already there, and thousands more yet to come. In Abu Dhabi, waiting for the connecting flight, I was struck by the sheer numbers of us at the Sydney and Melbourne gates which were adjacent to each other in the airport.

Wanting to be a writer, I had a different career path to follow that involved reading, crafting and other work not constrained by geography but self-discipline. I was more a drifter in Australia, not really sure what I was doing, trying to figure myself out after some personal crises and trying to find that elusive self-discipline to write. I’d a handful of friends scattered around the main cities and some in the outback to go to.

An inevitable question I’d get asked on meeting other travellers was “where did you do your farm work?” To qualify for a second year, people on working holiday visas must do 88 days of work in regional areas, and a lot of this is on farms or doing construction work in remote Australia. Fishing, pearling, forestry and mining all counted as “farm work”. Even now when I meet people who were over there, I’m asked that same question, and still I’m hearing the most colourful stories about it. I did mine packing citrus fruit in Victoria and WWOOFing on an olive grove in Tasmania.

In Red Dirt, some of the main characters are going up to a mango farm in the Kimberley to do their 88 days. They barely know (or like) each other, but are banded by their Irish nationality, something I noticed a lot of when I was in Australia. A dreadful thing happens on the road, where in the middle of the night, one of them - Hopper - tripping on acid, jumps out of the car. He flees into the bush and the others can’t find him. The narrator of this section, Murph, decides they should go on without him.

He has to then deal with the guilt of making this choice of abandoning “...the f**ker in a country that was mostly nowhere to us”.

In the second section, Fiona has run out of money. With her financial despair and low self-esteem, she ends up in a nightmarish situation. She has to find her own strength, and discover that although she feels the Irish government and banks squandered away her opportunities at home, what happens to her is ultimately her own responsibility.

Hopper, the hero of the third part of the book, realises that “Ireland only gives a f**k when the brainboxes leave...” He too has to overcome some demons from the past while navigating this new life.

Though the book is fictional, the characters formed easily in my imagination; their voices were an amalgamation of some of the Irish people I’d met. Like the people who’d never really left their villages at home in Ireland, and were now in this huge, hot country. Or others who got lost in a negative spiral, filling the loneliness void with excess drinking and drugging. Or the Celtic Tiger cubs who had to take a reality check on their sense of entitlement. And all the ambitious people too, determined to live the Australian dream, who were optimistic and hard-working, who assimilated but were still generous to the ones off the boat.

I was inspired by how we were bound to each other in Australia by being Irish. I was inspired by the dislocation and interactions taking place within this new, stunning landscape. All the stories.

Red Dirt by E. M. Reapy is published by Head of Zeus on June 2nd. The novel will be reviewed in The Irish Times Books pages by Sarah Gilmartin on June 11th.