Moving back to Northern Ireland, I now appreciate my Irishness and Britishness

Today I wear a red and white poppy, recognising the complexity of the Troubles and my identity 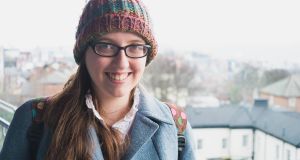 Two summers ago, I was sitting reading one evening at Belfast City Hall and I saw a group of teenagers attack the poppy wreaths in front of the statue of Queen Victoria. They kicked them apart. I fixed them together again later. The poppy is an extremely divisive symbol in Northern Ireland.

For most of my life I didn’t know it was divisive. I went to a Protestant primary school, Protestant secondary school and socialised as a teenager at Protestant youth clubs. It was a very insular way to grow up, in a deeply-divided society. Though it was logical, due to that divide. From my early years in primary school, we studied the world wars and Britain’s role in them. I think I first studied the battle of the Somme at the age of seven.

I wrote before for Generation Emigration in The Irish Times about how moving to England made me feel much more Irish, and I was alarmed to feel so different in the heart of the union which I was raised to revere. I was very homesick when I wrote that article, and it seems very raw now. I didn’t write of the good things about England, or of any of the great people I met there.

Back in Northern Ireland

Since moving back to Northern Ireland, I have come to realise that while I am Irish foremost, Britishness will always be an element of my identity. It’s not a Britishness like that in England, perhaps. Perhaps it is best described as Ulster Britishness.

I will never perfectly fit the stereotypical Irish identity due to being a Northern Protestant – and the conflicts involved in being caught between two identities which are presented as polar opposites. One such conflict has been my struggles with the symbolism of the poppy. In my unionist upbringing, of course, I had none. My devotion to its meaning was automatic and uncritical, as I knew of no reason to be critical.

In my home of Co Fermanagh, the poppy’s meaning for the unionist community is intensified by the 1987 provisional IRA bomb that exploded at a Remembrance Day service in the centre of Enniskillen, killing 12 Protestant civilians. One person killed was Marie Wilson, a nurse and a former deputy head girl of my secondary school. Her father, Gordon Wilson, who lay under the rubble with her as she died, was a southern Protestant.

The Provisional IRA had planned another bomb for that day, which was thankfully foiled by the British army, at Tullyhommon, 20 miles from Enniskillen. The bomb had been placed on the route of a parade taken by the Boys and Girls Brigade. Some of them could have been killed. I often took part in similar parades as a child, as a member of the Rainbows, Brownies and Guides. From about age five I wore a poppy, and attended a remembrance service every year at church.

From 18 to 21, however, I wore a white poppy rather than a red one. The first time I heard a counter-narrative to the one I had grown up with was after I moved to Belfast for university. I learnt of Bloody Sunday, the Ballymurphy massacre, that the army had killed civilians including children, that the army often intimidated and tortured Catholic citizens, of internment without trial, of activists such as Paddy McLean, a teacher from Co Tyrone and former chairman of the Northern Ireland Civil Rights Association, who was one of “the hooded men” taken away and tortured by the army. I learnt of collusion between the British army and the RUC, with loyalist paramilitaries, resulting in the deaths of Catholic civilians.

I was shocked and horrified that within a region of the UK, the British army had killed its own citizens. That many in the Catholic community had lived in fear of an army that was supposed to protect them. I had grown up believing the army to be entirely noble. It felt like the world as I knew it was, with each horror and injustice I discovered, slowly coming crashing down.

I think if I had of known of these wrongs earlier in life, the shock would not have been so destabilising; I would not have felt so personally ashamed. Perhaps it is more so shame that so many of us cannot grow up with a more critical understanding of our “side’s” role in the conflict.

So I wore a white poppy, because I wanted to remember all who had died in conflicts, not only in the Troubles, but worldwide. I wanted to acknowledge that the state too can kill innocents. Mostly, I struggled to know how I felt about the British army. Many people near where I grew up have served in the Ulster Defence Regiment (UDR) – some Catholics too. Yet, some members of the UDR had killed civilians in collusion with loyalists. The army had saved many lives and prevented many bombs, like at Tullyhommon. Yet, they had also opened fire on Catholic civilians.

I feel too for the English, Scottish and Welsh soldiers who came here. Many of them were working class and the army offered a purpose for their lives. They were told nothing of the history that had led to them being here. As Bernadette Devlin McAliskey said in her maiden speech to Westminster in April 1969, “If British troops are sent in I should not like to be either the mother or sister of an unfortunate soldier stationed there.”

When I lived in England, on the odd occasion I would encounter ex-army men who had served in Northern Ireland. Once, in my local Tesco, when I was buying alcohol I had to show my driving licence. I was born in Derry and the worker remarked that it was a long time since he had been there. I noticed his army tattoo. I wondered to myself what his story was, whether any of his friends had been killed in the North. I thought about how scared he might have been at times.

And then I think of the Catholics who lay dying on the streets of the city of my birth on Bloody Sunday, while protesting for their civil rights, shot by the paratrooper regiment. How scared they must have been as they left this world. My mind is a constant circle of conflicts, between the wrongs and hurts committed.

I am torn because both Protestants and Catholics, unionists and nationalists and all in-between, are “my side” as they are all of this island. I am Irish and a British citizen. However, I have come to worry that, due to the shame I feel about the wrongs done by the unionist/British side, that I am not properly acknowledging the hurt inflicted on it. So 2016 will be the first year I wear both a red and a white poppy. By wearing a red poppy with a white one, it captures my feelings of gratitude and anger; my critical remembrance.

To me, wearing a red and a white poppy is the best way I can honour the complexities of conflict and a means for me to come to terms with how Britishness feeds into my Irish identity.