Modern Ireland: a country shaped by those who have come and gone

Opinion: We tend to focus on emigration, but the movement of people into and within Ireland has also had a profound impact 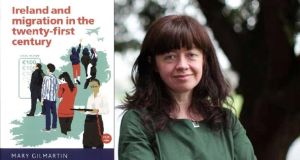 Mary Gilmartin: ‘My brother, sister and I, between us, have lived in the US, Britain, Australia, South Africa, Indonesia, Qatar and Egypt. Our cousins are scattered across Ireland, Britain and the US: from Sligo to Dublin, from Glasgow to London, and from New York to South Dakota, Texas and California.’

When I teach university undergraduate students in Ireland about migration, I ask them each to construct a migration family tree. I do this so that students get a sense of the tensions and complexities of migration from Ireland, both from their own perspective and then, collectively, with their fellow students.

The stories about migration that they uncover, each year, are both predictable and unpredictable. They identify collective patterns - periods when more migration happened, places that were more popular as emigrant destinations - but they also identify patterns of movement that are not easily categorised, and experiences of migration that defy simplistic explanation.

The migration family trees generally focus on the period after Irish independence. They show the waning importance of the US and the ongoing importance of Britain as migration destinations, but they also show the growing draw of Australia and the wide reach of emigrants from Ireland.

They also show the vast range of reasons for the initial decision to migrate and decisions to move on or to stay: from work and study, to the desire for adventure or escape, to love and other relationships and family responsibilities that either root people in place or provide imperatives to move. They also capture the extent to which people move more than once in their lifetimes, and how those moves often include a return to the place they earlier left, either for permanent or temporary periods.

My own migration family tree is similarly ordinary and extraordinary. I grew up in Sligo, in the northwest of Ireland. My mother’s parents spent years in New York, in the 1920s and 1930s, before returning to the place they grew up, in rural Leitrim. Eight of my parents’ 12 siblings spent most of their lives outside Ireland: six in the greater London area, and two in the US. My dad worked in Birmingham for a while, before moving to Ireland to take up a job.

My brother, sister and I, between us, have lived in the US, Britain, Australia, South Africa, Indonesia, Qatar and Egypt. Our cousins are scattered across Ireland, Britain and the US: from Sligo to Dublin, from Glasgow to London, and from New York to South Dakota, Texas and California. Some think of themselves as Irish, while others have little or no affiliation to the place their parents grew up.

These movements to Ireland may be less numerous and less substantial than the movements of family members from Ireland. They are, nonetheless, a very important component in understanding the broader relationship between Ireland and migration.

Despite this, our knowledge of migration to Ireland is patchy, sporadic, and limited. Geographer Ernst Ravenstein, in 1885, showed that people from Britain had a substantial presence in parts of Ireland in the 1870s. At the time, this would have been considered internal migration, since Ireland was then part of the United Kingdom. However, even after Ireland gained independence, people from Britain remained the largest migrant group in the country, until 2011.

Yet we rarely consider people from Britain as migrants, in the process displaying the same problematic assumptions of belonging that returning Irish experience. Instead, our attempts to understand Ireland as simultaneously a place of immigration have been concentrated on recent years, and on the changing patterns of migration to Ireland that have emerged since the late 1990s.

While the growth in migration to Ireland in that period is partly explained by returning Irish migrants - a pattern that was similar to the early 1970s - people also started moving in larger numbers from other places, such as Nigeria, Poland, Lithuania, China, India and the Philippines, to live, work or study. These movements co-existed with others that were more established, such as migration to Ireland from Germany, France and Italy, as well as from the US.

There had been earlier attempts to explain some of this migration as “counter-cultural”: people, particularly from more urbanised and industrialised parts of Europe, moving to Ireland to escape the pressures of modern life and to establish other, more environmentally-sensitive ways of living. This counter-cultural movement was enabled by rural depopulation, as people from rural Ireland moved to cities and towns, in Ireland and elsewhere.

Here, too, is another gap in the ways in which the relationship between Ireland and migration is understood. Internal migration - movement within boundaries - also matters when we seek to understand how places are shaped by, and in turn shape, migration.

For decades, migration - both internal and international - was a process that allowed the continuation of particular forms of rural livelihood in Ireland. In general, eldest sons inherited family farms or businesses, and younger sons and daughters were expected to move away and encouraged to find work, sometimes after further study. Those opportunities were to be found in cities and towns: in Ireland, particularly in Dublin.

These expectations helped create a “migration imperative” in many parts of Ireland. In the 1980s, most of my classmates in a girls’ convent school expected that they would leave Sligo at some point: to study, to work or to live. I was 17 when I first moved to Dublin, and my experience was commonplace. My brother and sister both left Sligo for Dublin when they were 18. Our father encouraged us, telling us to travel and experience the world when we were young and free to do so.

But even if this movement of young people away from rural areas, villages and towns is expected or encouraged, it has consequences. The American writer bell hooks described the journey that took her away from the place she grew up, and how it opened up a gap between her and her family that was more than the physical distance between them. “Each movement away”, she wrote, “makes return harder”.

Similarly, the cultural theorist Stuart Hall says, of migrants going “home”, that there is no home to go to, because once you leave, both you and the place you leave are irrevocably changed. In Ireland, the poignant experiences of the “left behind” are charted by geographer Caitríona Ní Laoire. Their fears are represented in plays and literature, where the returning emigrant threatens to disrupt a precarious social equilibrium.

Paying attention to the ways in which these different movements of people are connected matters, because it moves our understanding of the relationship between Ireland and migration beyond narrowly focused narratives. Migration to and from the same place happens simultaneously, though the scale and extent of movement varies, sometimes significantly.

While international migration is significant, its relationship to internal migration must be explored. Accounts of migrant success are important, but they co-exist with experiences that are less positive and more traumatic. Structural issues intersect with individual experiences in framing how, why and when people migrate, and what happens to them as a consequence.

But these connections are also important because of how they shape place. Ireland as a place has been influenced by both the act and the meaning of migration: by the physical movement of people in, to and from Ireland, and by the symbolic implications of that movement. It is not always easy, or indeed convenient, to identify these linkages and connections. But if we are to develop our understanding of place in a progressive way, then it is important to consider the relationship between migration and place in a more expansive and critical way.

Mary Gilmartin is a senior lecturer in geography at Maynooth University. This article is an adapted extract from her new book, Ireland and migration in the twenty-first century (Manchester University Press), which is available now in book shops and from manchesteruniversitypress.co.uk.