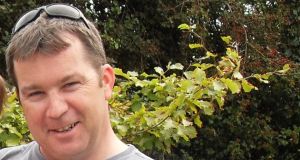 James Taplin: ‘Living outside Ireland with my family opens their minds to questions that would not be asked if we lived at home.’

The current refugee crisis close to us in Syria has got me thinking. Sitting with my eight-year-old son in our home in Dubai, watching it unfold on the television news, I am spending my time attempting to explain what is happening there.

I love his questions, and what’s more, I love being able to give him factual answers.

It reminds me of my own childhood when I would ask similar questions about world events. Who should I support in the Iran/ Iraq war? Why is the US boycotting the Olympic Games in Moscow? Is Margaret Thatcher a good person? Were Bobby Sands and the other Hunger Strikers heroes?

I remember listening to my dad’s responses. “Go and read up about things and make your own decisions. I’m not here to decide for you, he’d say.

This advice stood my in good stead. I wanted to have an opinion, but I wanted to make sure my opinion could be backed up with facts

As a child in the 1980s, researching world topics meant reading the newspaper, watching the news and going to the library. Now my young lad just types “Syrian refugee crisis” into Google.

As a parent it is not ok just to leave it at that. I want my children to come back and tell me what they think, to give me their opinion.

Son, do you think charging people for water is fair? Should Ireland take in a few thousand Syrian refugees? Can Ireland win the Rugby World Cup?

These are questions I don’t have the answers for, but still topics that require discussion. Thankfully we don’t always agree, the same way I did not always agree with my dad.

Living outside Ireland with my family opens their minds to questions that would not be asked if we lived at home. A few weeks ago in the UAE, 52 Emirati soldiers were killed fighting in Yemen. I don’t know if it even made the Irish news, but it lead my four-year-old daughter to ask, “Why did the one man kill the other man?”

For over a week, all the radio stations in the UAE played sombre music as a tribute to the martyrs, and every day on the school run my daughter asked “are the soldier men still dead?”

Constant questioning is an important part of growing up, and as parents it is imperative that we do not impart our own sometimes blinkered opinions on our children.

I hope living outside of Ireland will make them more tolerant than their father, and that when we move back home they will be well-rounded individuals who have a strong opinion on both Ireland and the world.

I know I will have failed in my role as a parent if any of my children come to me when they are 18 years old and ask me how they should vote in a general election.

Even if their opinions are polar opposites to mine, it is better than hearing that they just voted the same way as their mam and dad.