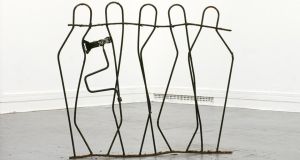 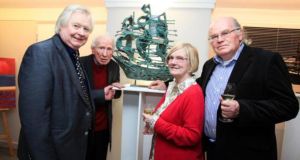 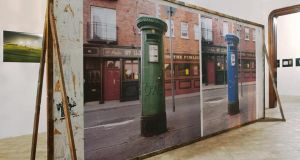 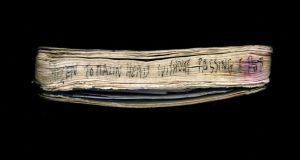 ‘Mizen to Malin Head Without Passing a Pub’ - David Blackmore’s journal from a solo walk the length and breath of the island of Ireland in response to a misquote from James Joyce’s ‘Ulysses’ - ‘A good puzzle would be to cross Ireland without passing a pub.’ 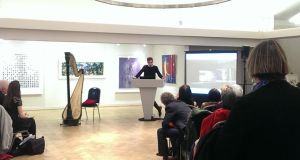 Minister of State for Diaspora Jimmy Deenihan at the opening of the London Irish Art Exhibition 2015 at Westminster Central Hall last week.

I always remember the Irish performance artist Nigel Rolfe, who I met while studying for a photography diploma at IADT in Dublin, advising me to move away to continue my career in a bigger city with more diverse influences. I left Ireland in 2003, to complete a BA in Photographic Arts at the University of Westminster.

I’ve spent over eleven years in the UK; a significant proportion of my life so far. In one sense time has flown by, but in an other, it feels I have lived many lives here. At first I was intimidated by the size and scale of London. I found it difficult building a new life for myself, although as time went by it gradually became my home.

The standard here is strong, and the work ethic within the art world is intense; people are very driven, that in turn with the competitive nature of the city pushes you further, always demanding more.

I am indebted to my visual and critical education through photography. But I am not a photographer. My practice has gradually moved away from the medium and now I operate as a nomad moving between sculpture, installation, walking and utilising appropriated objects. My work explores the ideas of resistance and protest against authoritative structures and systems, both public and private. Often this resistance manifests itself as the action of a trickster or unruly child, which I think comes from Ireland’s influence on my nature.

The 2015 London Irish Art Exhibition took place last week in Central London, just a stone’s throw from the Houses of Parliament at the Central Hall in Westminster. The show sought to explore the personal experience of the Irish diaspora living in the UK, specifically in relation to culture, identity and creativity.

I was lucky to have been selected to contribute. The exhibition was very diverse, with traditional alongside contemporary works. Half of the selected artists were made up of the Irish diaspora living and working in the UK.

The opening was a prestigious and well attended affair. Many Irish celebrities were present including Michael Flatley, whose paintings made with his feet were on display. Minister of State for the Diaspora Jimmy Deenihan opened the exhibition, and Irish Ambassador to the UK, Dan Mulhall, spoke about the Irish diaspora, Irish creativity and relations between the Republic and the UK.

To my complete surprise, I was awarded the Best UK Artist prize. Following the shock of hearing my name announced, I was asked to say a few words - none of which I had prepared.

I had two pieces in this year’s exhibition. ‘The punishment fits the crime’ [2010 - 2015]which consists of an amount of bituminous coal painted white, piece by piece. The work was instigated following a conversation I had with a student a number of years ago. Her father had been ordered to paint all the coal on a British Army base white in preparation for the arrival of the Queen; I was struck by the nonsensical nature of this task.

Following some research I found this task was in fact a punishment used by the British Army. Aside from the senselessness of it, the idea of painting coal white conveyed artistic practice to me. Artists are seen as being able to create something out of nothing, like an alchemist who claims to be able to change lead into gold. The activity of painting coal white as a form of punishment appealed to me as a metaphor for artistic practice, as well as the punishment an artist endures for taking this path; economic and social.

The other piece of work included in the show, ‘Jacked’ [2014], consists of a manipulated wrought iron park fence and a broken car jack. I have been intrigued by the forced gaps I saw in fences around parks and industrial estates. These metal bars are stretched using car jacks, usually by gangs in London, who go into spaces at night and use the jacks to open the railings. The aim is to provide multiple routes of escape if they are chased by police while engaged in illicit activity.

I am comfortable about being described as an Irish artist living and working in London, despite the fact that I have been gone a long time, and that my father is English. I am Irish, my family lives in Ireland and I spent the majority of my formative years in the country.

We are all the product of our environment; Irish life, humour and culture have shaped who I am, and therefore the type of work I make.