‘Fifteen years after leaving Ireland, I don’t think I’ll ever be back to live’ 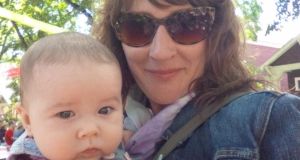 Georgia Gaden Jones: ‘When I stand on the pier in Dun Laoghaire and look out at the sea, that feeling, and my longing for it when I am away, is what it is to me to be Irish.’

I left Ireland in the spring of 1999, when the Celtic Tiger was in full voice, for “a year in Australia”. One thing led to another, and I wound up in Calgary, Alberta, where I now live with my husband and our two gorgeous daughters.

As a child and a young woman in Ireland, I was confused about my Irishness, or lack thereof. My parents were English, which sometimes made things complicated in ways that I did not at first understand. I wanted to belong.

Instead of having generations of family or history in particular place, I found national pride in media spectacles like the Eurovision and in the endeavours of the Irish football team. Cheering on Johnny Logan and Jack’s boys gave me that sense of belonging.

When I left for my Australian adventure I cried all the way onto the plane. I phoned my mum everyday for the first week, comforting myself with her voice and stories from home. Weeks, months, years, later, and I don’t think that I will ever return to live there, which is a difficult thing to write.

My visits home are more expensive and less frequent these days, but those visits are somehow really important: to stand on the beaches in Dublin and in Wexford and to put my hand in the water and breathe the sea air; to laugh with friends and family and to walk over fields and feel the soft ground underfoot; to sit at the table and eat white pudding with my breakfast.

Last time we were in Dublin I showed my husband where I spent all my money in the jukebox in Bruxelles, where I bought concert tickets at the Sound Cellar, and where I spent endless afternoons in Stephen’s Green. Our eldest daughter played with my friends’ children.

When we visit this summer we will take the girls on walks along the lanes around my mother’s house outside of New Ross; to JFK Arboretum; to play on Killiney Hill and to run around the obelisk, and through the woods playing hide and seek.

Ruby will see the children she does not remember meeting the last time but who I tell her about, and show her photographs of. Zelda will step foot on Irish soil for the first time.

Weather-permitting we will stand outside on a clear night and look up at the stars and breathe the air. I want them to have these experiences of Ireland.

These details are small personal moments of connection, and history, they are pieces of me.

These days, when I don’t sound as Irish as I used to, or my name doesn’t raise tricolours in people’s minds, it is the significance of these details that constitutes my Irish identity. When I stand on the pier in Dun Laoghaire and look out at the sea, that feeling, and my longing for it when I am away, is what it is to me to be Irish.