Why I love living in… Dresden 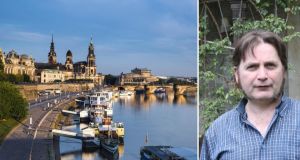 ‘Germans like to indulge in a vision of Ireland as a country of freedom, fun and spirituality. This is sometimes strange but can also be advantageous.’ Photograph: Thinkstock

I came to Dresden in the former East Germany in September 1996 and have lived here ever since.

My brother, a carpenter, came here in 1994 to work on the sites. My other brother, a barman, followed him in 1995 to work in that indispensible adjunct to nomadic Irish building workers, the Irish pub. It seemed almost inevitable that I should follow.

At that time, I was teaching Irish and English to secondary school students in Dublin. My bothers told me that English-language teaching was in great demand in East Germany, where the only foreign language they had learnt in school was Russian. So I did a course in teaching English as a foreign language, took some German lessons and, in 1996, followed them over.

For a few weeks I worked on the sites. But they soon got rid of me for being “useless”. Luckily, I found work as an English teacher almost straight away. I also learned German very quickly, so quickly that after three years I began working as a technical translator. This is what I still do.

Both my brothers have moved on: the barman back to Ireland after a further seven-year stint in the Netherlands, and the carpenter, after two years in Canada, is now in north Sweden.

Life in Germany can be excellent. The cost of living is lower than in Ireland, while the quality of living is, in many respects, higher. I need only mention public transport systems, kindergartens, the health service and building standards - there are no draughty windows or bockety radiators in German homes.

Another advantage is that closing time in bars is left up to the discretion of the owners. This means you can go out at 10pm on a Saturday night and come home at 3am and spend only €25. There is none of the pressure of the Irish drinking culture and 24/7 availability of alcohol has not lead to rampant alcoholism, as some might fear it would.

On the other hand, I miss the warm civility and wit of the Irish. The notion of entertaining flights of verbal fancy (“Tell me a lie but make it a good one!”) is wholly alien to solid, reliable German sensibility. Another thing I miss is the sea.

Being Irish in Germany automatically confers bonus status. Germans like to indulge in a vision of Ireland as a country of freedom, fun and spirituality. This is sometimes strange but can also be advantageous. Irish traditional music is very popular, with many festivals and concerts.

Dresden, where I live, is known for the bombing and destruction of the city in February 1945. Before that, it was famous as one of the most beautiful cities in Germany. However, major reconstruction has been done and much of the old architectural glory of the city centre has been restored. Tourism is booming, with most visitors coming from Russia.

Recently, Dresden has also become known as the birthplace of the controversial grass-roots political movement PEGIDA. It claims to represent the concerns of citizens long disregarded and patronised by mainstream politics, while its detractors accuse it of being rightwing and xenophobic. Its regular demonstrations attract tens of thousands of participants.

To summarise, I would recommend Germany as an emigration destination. There are plenty of opportunities here and it’s not far from home. And far from seeing emigration as a bad thing, I have been greatly enriched by living abroad. Ireland, for all its beauty and unique Celtic genius and the love I bear for it, is still a small island. The world is wide.