Being an Irish man in Australia: ‘It’s a macho society’

How to be a Man: I wasn’t the only bloke pushing a stroller through our local shopping centre, but Australia is still a macho society 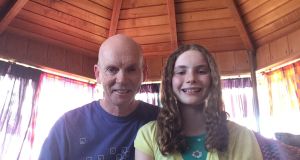 Philip Lynch and his daughter Molly in Tasmania: ‘When our daughter was born I was able to negotiate a day off every week to share some of the parenting. My part-time work status raised no eyebrows.’

This article forms part of the How to be a Man series, running all this week in The Irish Times. If you are living abroad and want to add your voice to the series, send your experiences and opinions on the topic to emigration@irishtimes.com by Wednesday September 28th.

I like to think I’m at least in the ballpark when it comes to being a modern dad.

But when I canvass my teenage daughter’s opinion, she doesn’t hold back. I’m swiftly rebutted. “Name one YouTuber, Dad,” she demands with more than a hint of amused exasperation. “See,” she adds when I fall well short with my reply.

Sometimes when I bunker down behind my laptop, usually towards the end of the day after I’ve loaded the dishwasher, I recall my father whiling away winter evenings, engrossed in his newspaper. Given his life-long interest in current affairs, I imagine he’d have surely embraced the convenient immediacy of an iPad or some such device, but alas, he was well gone before the advent of social media.

His faith never flagged. Mass was a not to be missed event. Nothing he heard from the pulpit ever caused him any disquiet. Sunday served as the restorative circuit breaker of his working week. While he bantered with the other men afterwards outside around the church gates, my mother waited and watched in the car. As a long lapsed Catholic, and even a one-time half-hearted seminarian, I no longer share his conviction. But, for some strange reason, I’m still loath to do any non-essential work on Sundays.

My parents’ roles were clearly demarcated. They stuck to a traditional narrative and little changed throughout the span of their lives. You’d never catch my mother at Granard mart or handling hay bales. She was loath to spend much time outside the house. She never managed to learn how to drive. Outside was my father’s domain. Inside was where he ate and rested. He never did the dishes. He would never have swept the floor or ironed a shirt. Brewing a pot of tea on the rare occasions when my mother wasn’t around was as far as he was inclined to go.

After I emigrated, I eventually drifted into my comfortable middle-class Melbourne existence. When our daughter was born I was able to negotiate a day off every week to share some of the parenting. My part-time work status raised no eyebrows. I wasn’t the only bloke pushing a stroller through our local shopping centre. Several other fathers also attended the weekly “mothers’ group”.

These days I like to think I do my share in the kitchen and around the house, but the truth is I probably don’t. And I suspect I’m not alone in this regard.

There are many similarities between Irish and Australian societies. Despite occasional grumblings to the contrary, middle-aged Anglo-Saxon men in suits, by and large, rule the roost in politics and in boardrooms right across Australia. Women continue to earn up to 18 per cent less than men.

Female commentators cop much more vitriol than their male counterparts on social media. Women constantly have to work harder to be taken seriously in public life. Men are over-represented in talkback radio. Violence towards women still does not get the response that is warranted. On average, every week in Australia two women are killed by their partners or ex-partners. And many more are traumatised and injured. Yet government funding for women’s support services remains paltry.

Throughout her time in office, Australia’s recent and only female prime minister, Julia Gilliard, was subjected relentless vilification - from the way she dressed, her hairstyle and to derogatory comments about her personal life. Despite the fact that Gilliard was an accomplished and successful politician, it was her own (mostly male) colleagues who ultimately undermined her. Many pundits now argue that Gilliard’s excoriation may actually cause any woman contemplating entering Australian politics to think twice.

Despite giving rise to iconic trailblazing feminist figures like Anne Summers and Germaine Greer (who has long since called England home) Australia remains a macho society.

This machismo is all the more evident at this time of the year. Rugby League and Aussie Rules Football are ferocious high profile sporting codes and they enjoy blanket media coverage all over the country. By contrast women’s sports attract much less sponsorship and media attention.

In spite of all that, I am confident that as my daughter will have better options and opportunities than previous generations of women. After all, feminism is an incremental process. The clock cannot be turned back. Crude sexism and misogyny are becoming increasingly more taboo in Australia.

But for all that, my daughter will accrue her wisdom way beyond the YouTube bubble. Of that I’m sure. I’ll keep such thoughts to myself though as I suspect she’d be loath to agree.

This article forms part of the How to be a Man series, running all this week in The Irish Times. If you are living abroad and want to add your voice to the series, send your experiences and opinions on the topic to emigration@irishtimes.com by Wednesday September 28th.