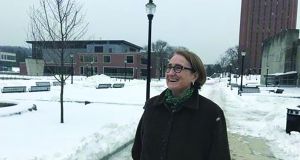 Íde B O’Carroll is from Lismore, Co Waterford. She is an adjunct professor at the University of Massachusetts at Amherst

Íde B O’Carroll, PhD, is from Lismore, Co Waterford. She lives in the United States, where she is an adjunct professor at the University of Massachusetts at Amherst

I am still reeling from last week, and the insurrection in Washington, DC, that was incited by the sitting president.

In the display of white privilege in which a mostly male mob of Trump followers stormed the Capitol to block the transfer of power to Joe Biden, these homegrown terrorists were treated very differently from Black Lives Matter protesters. The mob ransacked Nancy Pelosi’s office. She has been speaker of the US House of Representatives since 2019. A man sat in her seat, his bare chest displaying a Ku Klux Klan tattoo. Police found bombs and guns near Republican National Committee and Democratic National Committee offices. How did we get to this place?

When the election of Donald Trump as president was announced, in 2016, I was surprised to learn that more than 90 million eligible voters had not cast ballots. We had all become way too complacent about the US’s delicate democracy. And, while Hillary Clinton won the popular vote, Trump won the Electoral College, the byproduct of the compromise to end slavery. That’s the system in place in the United States.

The 45th president is a self-centred, self-promoting, boorish businessman who assaults women, twists the truth, denies science and doesn’t do empathy. His election was made possible because of a TV show that promoted his brand and rescued him financially. A master of Twitter, which he is now banned from, he knows how to keep the focus on him. Two thousand Americans are dying daily of Covid-19 because of his ineptitude. Why did so many Americans vote for him again this time around?

During his term in office I worked on my book Irish Transatlantics, 1980-2015, and taught part-time at UMass-Amherst, the state’s public university. Teaching has helped me to navigate four difficult, divisive years here.

In a course on Migration and Belonging, a tall black student tells the class: “I come from poverty. I belong to no man.” His is an unexpected narrative about life in the US in the 21st century, not spin. He talks about the reality of poverty in the world’s richest nation and, crucially, his embodied connection to its history of slavery.

During the pandemic, our classroom here in Massachusetts has morphed from the real to the virtual, but we continue to learn that the US is both a place and an idea. The dominant narrative is that it is a place of welcome and opportunity for so many. However, we also learn how the economy was built on land stolen from native peoples, the labour of black slaves and immigrants and the systematic oppression of women. All to benefit the wealthy 1 per cent.

Women could not participate on juries in all states until 1973. The equal-rights amendment to the US constitution, written in 1923, has yet to be adopted. Women and men of colour still earn less than white men, and there has been no real wage increase since the 1990s. The US has been unable to live up to its own ideals. Politics has not delivered the necessary change.

We learn how the economy was built on land stolen from native peoples, the labour of black slaves and immigrants and the systematic oppression of women

The structural and systematic changes required to ensure equal access to education, work, housing and healthcare have not happened, despite the hard-won gains of the earlier civil-rights and feminist movements. New social movements have emerged, mostly led by young people: March for Our Lives (gun control), Black Lives Matter (police violence), #MeToo (sex crimes) and the anti-climate change campaign. Even after Obama’s two-term presidency, there is still so much work to be done.

If Trumpism sought to “make America great again” when people of colour and women were subservient, what do its supporters fear about the now? According to population estimates, white people will be in the minority by 2050, a prospect that deeply unsettles certain white men, their jobs in manufacturing gone overseas. Meanwhile, women and people of colour are voting, and in greater numbers than ever before. They proved that in Georgia. They are the United States’ future.

In a class on US immigration, we questioned why Congress has failed to agree any significant immigration legislation since the 1980s, a situation that has allowed Trump to sign more than 400 executive orders on immigration. There are about 11 million undocumented people (out of a population of 330 million), a number that has been growing since the 1980s. Therefore, Democrats and Republicans share responsibility for an ineffectual political process, unable to find solutions to such big issues.

Republicans have been particularly reprehensible in turning a blind eye to Trump’s transgressions because he’s delivered for them on tax cuts for the wealthy, three US supreme court justices, and vicious, unprecedented immigration practices. But his term in office has highlighted perhaps the most serious threat to democracy and social cohesion in an age when social media drives the news cycle: disinformation. This has been crafted to mobilise his base, including claims about a fraudulent election result that incited his followers to storm the Capitol.

My students here learn to draw on reliable sources when conducting community-based research so they can analyse how the issues we’re studying in class play out in their own backyards. We inhabit the same society yet have vastly different experiences. Why? We vote to influence what is done in our name, but the personal is political, too.

On a course on immigration we are surprised by the supports for migrants (English as a second language in local libraries, sanctuary cities, advocacy groups) and shocked by other findings (towns that lack diversity; redlining, or the illegal practice of refusing to provide financial services to consumers based on the area where they live; co-operation with Immigration and Customs Enforcement, the federal agency whose stated mission is to protect the US from cross-border crime and illegal immigration). Working for the common good in the US starts with each of us facing the facts about its persistent inequalities, working for change within and across communities.

I am placing my trust in the Biden-Harris team to restore calm and build confidence again in the democratic system. They will need to lead us out of this pandemic, to return us to some fundamental truths, to rebuild the United States

Whether Trump will be impeached, so he cannot run again for the office, or removed using the 25th amendment, this insurrection must be taken seriously. I am placing my trust in the Biden-Harris team to restore calm and build confidence again in the democratic system. They will need to lead us out of this pandemic, to return us to some fundamental truths, to rebuild the United States.

Despite the win in Georgia, and given the insurrection at the Capitol, it will be difficult to unite the country. However, these facts about the 117th Congress are undeniable and signal a turn towards change: Jon Ossoff, Jewish, the son of an immigrant, and the Rev Raphael Warnock, the first black senator from Georgia (and pastor of the church Martin Luther King once led), will join a Catholic president (only the second) and the first woman vice-president, the black daughter of Jamaican and Indian immigrants, to pick up the pieces after this warning shot to democracy.