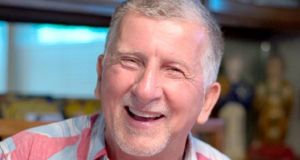 Jerry Barnes: ‘Divorce, abortion, gay rights, the boom, the bust, water charges - I’ve followed it all like an eager fan sitting on the sidelines always wondering if we, the silenced Irish, will ever have a voice in Irish affairs by getting the right to vote.’

Last November, The Irish Times invited Irish readers living abroad to submit their reflections on their relationship with the land they left in the ‘Ireland and Me’ competition. The story below is one of the entries we received, which is collected in a new 'Ireland and Me' eBook.

When I arrived in the United States in 1977 I had little time to think of my Irishness, one way or the other. I was too busy adjusting to a new life, finding a job and surviving. I must admit I was also younger, so much of my energy was spent in just having a good time.

But I soon entered the mainstream, meeting my partner, going back to school, developing a career, buying a home and becoming a US citizen. Throughout this time, my only tentative connection with Ireland was the odd bundle of Irish newspapers I would get once or twice a year in the post. During the height of the Troubles, the BBC was our only source of news. We were totally ignored by RTÉ, it’s only sop to us being the odd GAA shortwave broadcast.

Then the internet arrived. I remember the first time I accessed The Irish Times online - what a revelation! Hardly a day has gone by since where I haven’t read the paper online. Then RTÉ became available, which was ironic really, as growing up in West Cork we could barely hear Radio Éireann, the signal was so weak. Now my friends in Ireland think I know more about what’s going on than they do.

I am especially interested in the arts and am in awe that our small island continues to produce a seemingly endless stream of remarkable talent, especially in literature. And when the Irish excel on the golf course or the rugby field, how can that not put a spring in your step?

The internet has truly liberated us by allowing us to stay connected with Ireland while still participating fully in our adopted land. As well as access to Irish media, it also allows us access to distance learning such as the wonderful courses offered by Trinity College through FutureLearn.

Divorce, abortion, gay rights, the boom, the bust, water charges - I’ve followed it all like an eager fan sitting on the sidelines always wondering if we, the silenced Irish, will ever have a voice in Irish affairs by getting the right to vote.

Don’t get me wrong, I am also totally involved in my adopted country and I participate fully in my community. I love the US for all the opportunities it has given me. But I am Irish to the core until the day I die.