Gaelscoil in the Gulf: the 40 children learning Irish in the desert

Established in November 2015, Gaelscoil UAE is held in two emirates, Ras al Khaimah and Dubai, every Saturday morning and children aged between the ages of 4 and 11 learn Irish and practise traditional Irish music and songs. 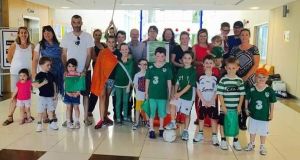 Pupils, parents and teachers at the Gaelscoil UAE, which was set up in October 2015 by three Irish emigrant couples 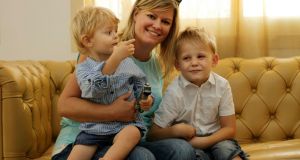 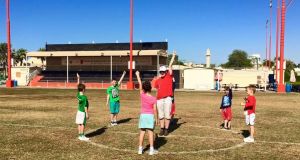 Pupils learning the basics of GAA at Gaelscoil UAE.

In the United Arab Emirates, the school week runs from Sunday to Thursday. But as the Saturday sun blazes down on Dubai’s Uptown School, the 14-acre campus isn’t quite deserted.

From one building comes the unlikely sounds of young voices chanting in Irish, and the faltering sound of a tune being practised on tin whistles.

This Saturday school is one of the venues of Gaelscoil UAE, set up in October 2015 by three Irish emigrant couples: Therese and Mick Heffernan, Esmé and Martin Halpenny, and Deirdre and Jez Youell.

“The idea was born from our own concerns that our children were lacking a continuum in their Irish language, which is a problem for Irish expats moving abroad who plan to eventually come home with their children,” explains Therese Heffernan, from Co Offaly, who followed her husband Mick to the United Arab Emirates three years ago with their four children, when he started work with a construction company there.

“I was asked to come on board with Gaelscoil as a founder early on,” she says. “The children I have taught in class in the last year have been fantastic to work with. There is a real interest and engagement from them in their language and culture.

“I have seen children of all ages walk into class on the first day without ever having, prior to Gaelscoil, any grasp of the language, and walk out to greet their parents with a ‘Dia dhuit’ or ‘Conas atá tú?’.

“It is important to remember that some of these ‘emigrant’ children have been born abroad into different cultures, or indeed travelled with their parents at a very young age and lost their Irish identities.”

Esmé and Martin Halpenny are originally from counties Meath and Laois. After he was made redundant from his job in the steel construction industry in 2012, Martin was headhunted by an Irish UAE business owner three years ago. Esmé now works at the Ajman Academy international school outside of Ras al Khaimah. Their children Dylan and Callum are 6 and 3.

Rory Galvin, one of 10 Irish teachers working in Uptown Secondary School, hosts the classes in Dubai, while sisters Gemma Rice Mullins and Sarah Rice have recently opened up their Little Little Treasures Montessori on Saturday mornings for Irish students in Ras al Khaimah. More than 40 children attended the first classes of this term.

Children aged between 4 and 11 spend one hour learning Irish, followed by an hour of songs and music.

“Our language classes see children split into groups of different abilities and our teachers work with them just as they would at home following the Irish primary curriculum,” Ní Raghallaigh explains.

This year, the children will also participate in Irish traditional music lessons. “It is something you would have to hear to believe – a class full of Irish boys and girls playing tin whistle in a classroom in Dubai,” Ní Raghallaigh says.

The Youells moved back to Sherkin Island in Cork during the summer, and Therese and the Heffernan children have just returned to live in Co Galway, while Mick remains in the UAE.

“The transition home has been made all the easier by the children’s involvement with Gaelscoil UAE,” she says.

“I’ll be representing it back home, meeting with Irish organisations to secure additional support. Our hope for the future is that Gaelscoil may become the first full-time Irish curriculum school in the UAE.”