Donegal airport landing strip is second most scenic in the world

The landing strip at Co Donegal's regional airport in Carrickfinn has been voted 2019's most scenic in the world. It also won the award in 2018. Video: Owen Clarke Photography 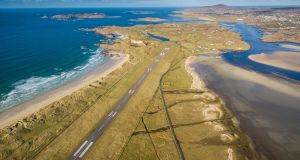 Donegal, not content with being voted the coolest place in the world to visit in 2017 by National Geographic Traveller, has now had the landing strip at its regional airport in Carrickfinn voted the second most scenic in the world.

The Caribbean island of Saba, which has the world’s shortest commercial runway, topped the poll of 122 airports worldwide shortlisted by the private jet book service PrivateFly and voted on by more than 8,000 respondents.

Adam Twidell, chief executive of PrivateFly, and an experience pilot, said: “I have landed at Donegal many times and the rugged coastline of Ireland’s north west coast is even more awe-inspiring from the air, with the backdrop of Mount Errigal adding to the timeless appeal.”

“Breathtaking, stunning, wild, dramatic ... You will not see anything like it anywhere else on earth ... An Irish welcome awaits every visitor”, were some of the comments made by voters about the landing strip.

It’s not the first time that Donegal Airport has featured in this poll; it took seventh place last year, despite not being among those nominated by the judging panel. “Voters can vote for any global airport – not just those on the judges’ shortlist,” a company spokesperson said.

Brilliant blue seas, with the famous Promenade des Anglais in the near vista and a mountainous backdrop, make for a dramatic landing at Nice Côte d’Azur airport and the Provençal location took third place in the poll.

Swooping past Gibraltar’s famous rock is sufficiently memorable for that landing strip to take fourth place, and Queenstown Airport in New Zealand, in a lush valley between mountains, was rated fifth.

Most regular fliers into and out of London City Airport are more concerned with its proximity to the heart of the city than with the views of the city as aircraft fly along the Thames, before landing on a runway surrounded by water. But sufficient numbers of voters gave it the nod to propel the British airport to sixth place in the poll.

Donegal Airport’s landing strip may not be as exotic as that on the winning Dutch Caribbean island. But the best view in the world, for the returning emigrant, is the first sight of home as familiar landmarks present themselves as an aircraft prepares to land. And the northern county has its share of diaspora scattered across the globe.

Radio presenter and social media consultant Bibi Baskin was born in Ardara, and has lived in New York, the UK and India, where she ran a hotel in Kerala. She says she has flown into the tiny airport “hundreds of times”.

“The approach to Donegal airport is entirely enchanting. There’s the craggy, rocky hinterland of the hills combined with the Atlantic in all its vastness and wildness crashing on to the shore. Even though I grew up in Donegal that view never ceased to excite. It truly is Donegal scenery at its best.

“Flying back to Donegal from tropical south India via the deserts of the UAE, and from London Heathrow, I would make sure that I had a window seat so that I could experience the best airport approach in the world. Well, maybe second best, according this poll. But for me, it’s number one.”

Joanne Sweeney-Burke, chief executive of Digital Training Institute, a digital agency based in Galway, and a finalist on the TV3 show The Apprentice, has been a regular commuter from the airport.

“Running a business from Letterkenny, I had to be in Dublin almost weekly for meetings. Driving was not productive and so I used Donegal Airport for commutes.

“Despite being a nervous flyer, I was always in awe of how we would approach Carrickfin at an acute angle and almost float sideways onto the runway below. The view is simply breathtaking, but the Atlantic winds were sometimes a bit much for me.

“I remember one January morning driving in heavy snow from my home 60 minutes away and calling the airport to say I was on my way. I made it with two minutes to spare and when I ran through the doors a staff member shouted: “We are waiting for you Joanne.”

Flights between Donegal Airport and Dublin Airport run twice daily all year round and there are flights up to six times weekly from Donegal to Glasgow International Airport.

But for PrivateFly’s private jet customers, it’s open all hours.

‘We poured our hearts and souls into it’: Last orders as landmark pubs and restaurants sell up
Real news has value SUBSCRIBE